Book Review: ‘A World Without Money or Politicians’

‘A World Without Money or Politicians’. By Colin Walpole, (2017. Order through Amazon). 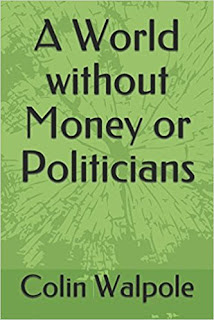 I had two reasons to buy this. Colin is my old ‘boss.’ I helped him, in my very small way, develop rugby union – his favourite sport – in a local city. Ex-pat  that he is, he brought rugby union with him to Denmark and developed a very  decent side. The other reason is clear enough: the SPGB has put a similar argument: a moneyless society of democratic control by the world’s people.

Colin’s booklet does not quote Marx, economics, anything. He makes observations, discusses thoughts, that he has had for years. That might make the booklet refreshing for many who might be bored by quotes from the Grundrisse.

Colin states his thoughts a few pages in. Get rid of a money economy and replace politicians by a direct democracy: ‘I’ve convinced myself that money gets in the way of self-fulfillment’.

Colin rips into money. If you don’t have it, you’ll do everything to get it. If you have it, life is easy and swell. This, though, is a weakness in the booklet. Capitalist society appears as a mass collection of commodities, to quote Marx (after all), where one – the money commodity – allows the exchange of all commodities because it is regarded as a universal equivalent. To attack capitalism, you must see it as a social relationship based on minority ownership, with majority exploitation: profits, rent and interest for the few; wage slavery for the rest. A class system with a class struggle.

I am certain people will enjoy this booklet: for one thing it shows workers are able to develop revolutionary ideas without a Leninist Party.