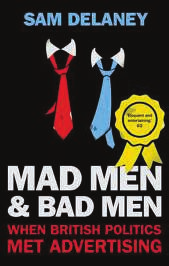 Political advertising is not allowed on radio and TV in the UK, but is permitted on posters, in the press and on-line. Party political broadcasts do not count as advertising, though advertising gurus work on them. Political ads are not subject to the advertising code, so do not need to be honest and truthful. Here Sam Delaney examines the contribution of advertising to politics, based mainly on interviews with admen and a few politicians. A couple of adwomen get brief mentions.

Saatchi & Saatchi are well known for their work on Conservative Party posters and election broadcasts. It worked both ways, though, as the political impact helped make the agency very successful. Delaney opens, however, by recalling an interview that Maurice Saatchi gave when Thatcher died, in which he claimed that the agency had not really done very much, and that presentation was not all that important in politics. Maybe this just illustrates the common adage that the adman should never take credit for the client’s success, since it is all down to the quality of the product (whether shampoo or a political party). Of course sometimes admen do claim that they played a central role. Possibly the truth is that advertising and presentation are crucial in close elections, such as that of 1992, but not otherwise.

The Conservatives have nearly always had far more money to spend on advertising than Labour, and Tory ads have often been rather more brutal than those of Labour. Perhaps the best-known political slogan was ‘Labour isn’t working’ from 1978. Complaints about this led to even more publicity for the Tories and the poster containing it. The ‘Labour’s tax bombshell’ poster from 1992 had a comparable impact, despite being not entirely accurate. Big ad agencies have been reluctant to be associated with Labour, on the grounds that their corporate clients might not approve, so their links have sometimes had to be kept secret.

One of the book’s themes is the way the balance of power between admen and politicians has changed over time. Originally admen were very much in the back seat, and Callaghan only consulted them after making decisions. But gradually they became more central, softening Thatcher’s image, for instance, and influencing which topics were given most importance in campaigns. The emphasis on criticising opponents rather than presenting a party’s own achievements and promises remains, but admen and their agencies now seem to have less of a role.

After reviewing the 2015 General Election campaign, Delaney writes, ‘It is hard to see why or to what end political parties will ever employ ad agencies again.’ This does not mean the end of political advertising, but a big change in how it is carried out. In April 2015 the Conservatives were spending £100,000 a month just on Facebook advertising. The use of social media has now become central, together with ads targeted at specific groups of voters (such as voters in marginal seats, or women who might be thinking of voting UKIP rather than Conservative). A lot of money has been spent in building up a database of actual and potential Tory voters, partly based on the causes people supported in petitions on change.org. Just as all advertising has become slicker and more ‘professional’, the same applies to its political cousin.

There is no mention of admen in Anthony King’s Who Governs Britain?. It can hardly be argued that the admen are among those who govern, but they clearly sway people’s opinions and that shows the influence wielded by money.

‘Torture: Does it Work?’ By Yvonne Ridley: Military Studies Press, 2016. 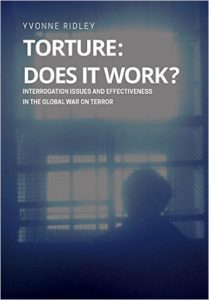 To most people the idea of torture is a Hollywood fantasy, a fictional beast reserved for high budget screen plays starring the likes of Bruce Willis and Jason Statham. To Yvonne Ridley, however, the idea of torture is a very real prospect. After being captured by the Taliban in Afghanistan in 2001, Ridley was held captive for ten days and, despite not experiencing physical torture, the mental strain she endured certainly qualifies her to write about such a subject. In this book, Ridley uses her experiences to produce a well-researched piece, discussing many of the key aspects of torture from the philosophical origins of the practice, to a spike in the use of torture since 9/11.

The book especially focuses on the methods used by the United States to circumvent the Geneva Convention rules and particularly the opening of the Guantanamo Bay detention camp in 2002. Despite the official stance of the United States against torture, a workaround was found by changing the definition of torture following the September 11attacks in New York, and renaming torture methods such as water boarding as ‘enhanced interrogation techniques’. The classified nature of what truly occurs at Guantanamo Bay, Ridley suggests, allows for the United States to practice torture on terror suspects in private, whilst also holding a public stance against the issue.

Ridley discusses the arguments for the use of torture, with the notion of the ‘ticking time bomb’ scenario and the introduction of ‘torture warrants’ for extreme cases, as well as the idea that suspected terrorists should not be treated as prisoners of war, not deserving the rights outlined in the Geneva Convention. These ideas are debunked by Ridley, pairing her experiences to interviews with ex-Guantanamo detainees and finding a range of negative connotations to the use of torture. Included in these points is the alarming fact that false intelligence fabricated by torture victims was a catalyst in the United States’ invasion of Iraq.

Overall, this book offers a great insight for those interested in the phenomenon of terrorism, with a strong and highly referenced argument against the use of torture. Ridley’s argument is perhaps summed up best by an analogy to close, in which she describes torture ‘as about as effective a weapon in modern warfare as a substandard Thompson submachine gun would have been for a soldier embattled on the front line during the Second World War’. 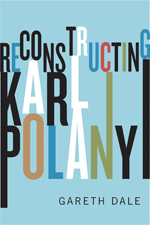 Karl Polyani (1886-1964) is best known for his 1944 book The Great Transformation about the emergence of the market economy and market society in which, contrary to all previously existing societies, everything including land, labour and money has a price and is bought and sold. He demolished the arguments of his fellow Austro-Hungarians (he was from Hungary), Von Mises and Von Hayek, that an unregulated market economy was natural and the most rational economic system. He called it a ‘capitalist utopia’ and showed how the state had played an active role in promoting its coming into being.

Dale’s book will tell you all you want to know about him and his other ideas. Polyani was a Social Democrat who believed that political democracy opened up the possibility, even the inevitability, that popular pressure would transform into ‘socialism’ as a society in which state planning would subordinate the market (he did not envisage the abolition of the market).

Dale also records how in the 1930s he was a fellow traveller of the worst kind, justifying Stalin’s ‘terror trials’ believing the clearly fabricated ‘evidence’ presented by the prosecutors.

Despite this, The Great Transformation remains a classic criticism of laissez-faire capitalism.

In our review of Micah White’s book The End of Protest: A New Playbook for Revolution we said we would say how he did in his bid to become mayor of Nehalem in rural Oregon in the election there in November. He got 36 votes (20%). The election was won by his Republican Party rival with 138 votes)