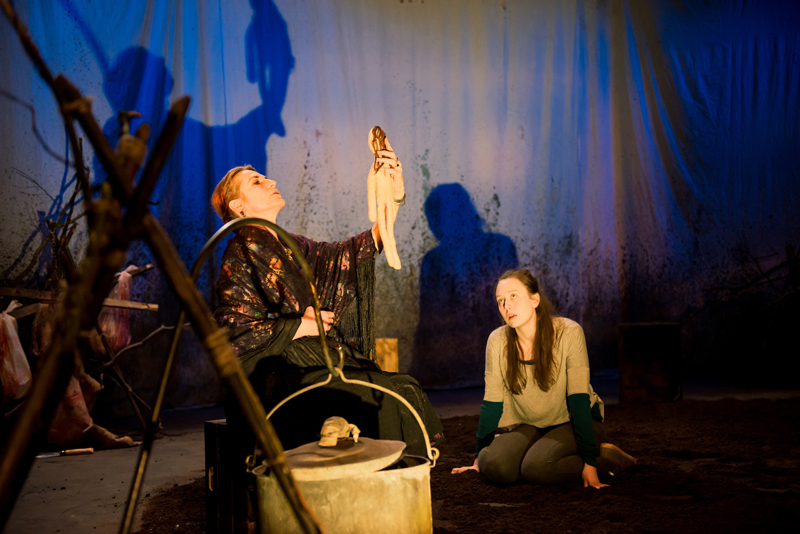 Our Big Land by Romani writer Dan Allum was directed by Amy Hodge last year at the Oval House Theatre in Kennington, London. It is a brutal, bloody and beautiful drama, a ‘mystical, dark, epic poem’ according to Allum (InSuffolk, 14 February 2014) which centres on the ‘bauro diklo’, a sacred storytelling/fortune-telling shawl passed from mothers to daughters which symbolises Romani spirit and culture.

The Romani matriarch Oceania is played by Robyn Moore who was memorable in 2003-04 in the working class TV soap opera EastEnders. Her son Roman is played by Samuel Edward-Cook, and Sophie, the Gadje (non-Romani) house dweller who is drawn into the world of the Romani as a child, is played by Scarlett Brookes. Allum puts women at the central place of the narrative as Oceania perceives in Sophie a ‘gypsy heart’, and we see Sophie grow from a girl to become a strong woman.

Allum was inspired by the memory of  ‘when I was a  kid we used a camp in Essex and in the wood was a traveller mother and – no father. They wouldn’t mix with the travellers and non-travellers. It was quite mysterious, and I never forgot about them’ (Oval House programme February 2014).

During the early part of the play we hear the cautionary petty-bourgeois nursery rhyme for children; ‘My mother said never to play with the gypsies in the woods and if I did she would say, naughty girl to disobey.’ The Romani live in the forest apart from bourgeois society. Oceania refers to ‘keys for a cage’ which symbolise the capitalist fetish for home ownership and private property.

Bourgeois society fears the Romani, and the woods or forests where they live come to have supernatural powers which frighten bourgeois sensibilities. In Nathaniel Hawthorne’s 1850 novel The Scarlet Letter set in Boston, Massachusetts in the 1640s, the woods for the Puritans become a symbol of darkness where the devil and his witches reside. The woods are the only place that Dimmesdale and Hester Prynne can meet away from the stern, repressive laws of Protestant society. Protestantism was a result of developing capitalism and was its ideological justification.

Oceania is dismissive when Sophie appears in her school uniform; ‘uniforms are for prisons’ and later says  ‘How can you understand freedom, when you’ve never had it?’ Sociologists  have described the Romani as usually engaging in self-employment rather than the more common  wage-labour of capitalist society,  sometimes claiming ‘the Gypsies history is also the history of their refusal to be proletarianised’ (Judith Okely The Traveller-Gypsies), but  Gypsies could also be classified as ‘petty-bourgeois’ under the Marxist definition as they work independently yet are ‘dependent on a wider economy within which they circulate supplying goods, services and occasional labour’ (Okely). It is also important to point out that ‘Gypsies enter the market without the protections afforded non-Gypsies, often working in the alternative economy in casual employment’ (Brian Belton, Questioning Gypsy Identity: Ethnic Narratives in Britain).

Oceania, Roman, and Sophie later face eviction from their land with bulldozers at the gate which evokes the tribulations of the Irish Traveller community at Dale Farm in Essex who had lived there from the 1980s to the 2011 eviction by bailiffs and riot police. The Dale Farm eviction took place at the same time as capitalist media stereotyping and misrepresentation of the Romani and the Irish Traveller community in ‘reality’ programmes such as My Big Fat Gypsy Wedding. This prompted  Billy Welch, spokesman for the Romani to say ‘While Channel 4 should be praised for at least differentiating between Irish Travellers and Romani Gypsies, the first three episodes have in fact focused exclusively on Irish Travellers and their traditions: They called the show Big Fat Gypsy Wedding and you’ve yet to see a Romani Gypsy in it’ (Guardian, 7 February 2011).

Allum’s play is defiant and proud with Oceania declaring ‘the Romani Nation won’t bend or break.’ The Romani people need their strength to combat the hostility of capitalist society; at the 2012 Tory Party conference, Communities Secretary Eric Pickles demonised Romani and Traveller communities when he vowed to ‘stop caravans in their tracks’ (Guardian, 12 October 2012). In August 2013 Pickles declared ‘I want all councils to be ready to take action straightaway to stop illegal camps and unauthorised sites’ (Inside Housing, 9 August 2013). This follows the scrapping of diversity and equality guidance so that Romani and Travellers can be persecuted. It has been identified that ‘there is a recognised national shortage of legal pitches for Gypsies and Travellers’ (Inside Housing, 9 August 2013).

Our Big Land is clearly opportune, what with Pickles declaring war on the Romani, and also the Tory government and UKIP opposition to eastern European (aka Romani) immigration. And, in essence, the persecution of the Romani is ‘camouflaging the failures of capitalism, particularly in times of economic slump, by seeking out scapegoats’ (Socialist Standard, January 2014).