Book Reviews: ‘The Better Angels of Our Nature’, & ‘The Failure of Laissez Faire Capitalism’

The Better Angels of Our Nature. By Steven Pinker. Penguin £12.99. 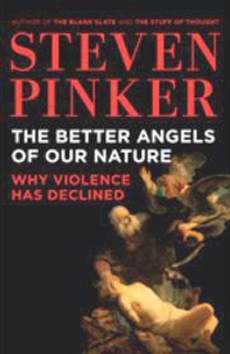 This is a real brick of a book (over eight hundred pages of text), but its message can be stated very simply: the extent of violence in society has been declining over many centuries and is still doing so. To support this claim, Pinker cites a mass of historical statistics, and to explain this supposed trend he appeals to both political and psychological factors. The title, by the way, comes from a quote by Abraham Lincoln.

In part this drop in violence involves the drastic reduction or effective elimination of such things as bear-baiting, execution by means of breaking on the wheel, human sacrifice and the most gruesome forms of torture. Murder rates have fallen quite drastically, for instance from 110 per 100,000 people per year in 14th-century England to less than one per 100,000 now. But above all it means a reduction in the number of deaths in war, or, more accurately a cut in the proportion of the population killed in war. The Second World War was responsible for 55 million deaths and was the bloodiest conflict ever. Yet the An Lushan rebellion in eighth-century China was responsible for 36 million dead, and, if scaled up to twentieth-century population figures, this would mean well over 400 million deaths.

It may be reasonable enough to speak in terms, not of absolute numbers of casualties, but of proportions and a person’s chances of being killed. Yet this emphasis on relative figures leads to some bizarre conclusions, especially the view that there was a Long Peace in the second half of the twentieth century: but then, all ‘peace’ under capitalism is relative. In the first decade of the present century, the annual global rate of battle deaths was less than one per 100,000 people. But this figure requires some careful redefinitions, such as saying that most of the deaths in Iraq were caused by subsequent ‘intercommunal violence’ rather than the American invasion itself. Moreover, a nuclear war is by no means out of the question now (see Material World in the January Socialist Standard). Also, it is not just war that needs to be considered: according to the One Billion Rising Campaign, one in three women on the planet will be raped or beaten in her lifetime.

As for the causes of war, Pinker claims that countries no longer fight over scarce resources, though he accepts the existence of a ‘resource curse’, whereby less-developed states with plenty of non-renewable resources are often extremely violent. However, the Senkaku/Diaoyu islands, currently in dispute between China and Japan, may well have oil reserves, and war there is by no means ruled out. He also treats cases for and against going to war as rational solutions to a problem in game theory, with positive and negative values for the different sides either fighting or not. But this assumes that those who may benefit (the rulers and owners) are the same people as those who are likely to be killed.

Pinker has featured in these pages before (for instance, see our April 2003 issue for a dissection of his views on human nature and his misunderstandings of socialism). And things have not improved much here: he uncritically considers Stalin and Mao as representatives of ‘Marxian socialism’, and there can be no excuse for referring to ‘the Marxist conception that all human behavior is to be explained as a struggle for power between groups’. 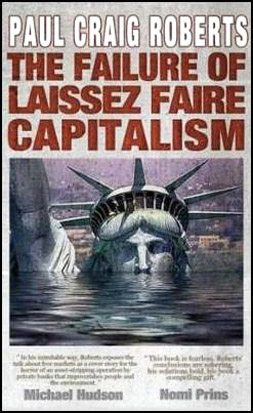 Paul Craig Roberts is of interest as he is a former Assistant Secretary to the US Treasury under Reagan and an erstwhile columnist for the Wall Street Journal who has written an excoriating attack on free-market economics in this book. In particular, he criticises financial deregulation and ‘offshoring’ of jobs and says these are part of what is effectively a conspiracy by the elites in the US and other Western countries to ensure an increasing amount of wealth goes to the very rich and ever less to everyone else. At one point he claims:

‘The United States is the first country in modern history to destroy the prospects and living standards of its labor force in order to enrich the top 1% of the income distribution. Once a land of opportunity, America is being polarised by globalism into rich and poor’ (p.117).

But there is of course a problem with this viewpoint, and one he does not address. America (like all other capitalist countries) has always been characterised by massive income inequality whereby the people who own and control the means of living receive colossal incomes that bear no relation to the effort (if any) they have made, while the vast majority are exploited to keep them in their positions of privilege and power. Reading this book, anyone would think that it is only since the Clinton administration onwards that these things have been a noticeable feature of life.

In fairness, one of the more positive aspects of this book is that there are a number of interesting facts and statistics presented at various stages to support aspects of his case, including on the real nature of employment and unemployment in the US. For instance, Roberts claims the real unemployment figure is nearer 23 percent than the ‘official’ 7.5 percent. There are also interesting statistics on changes in the US labour markets and on the stagnation of real wages there.

However, real wages for large numbers of US workers have been stagnant or declining from as far back as the early 1970s and this was never fundamentally addressed or reversed by the Reagan administration of which Roberts was a part. Indeed, Roberts seems very coy about Reagan and ‘Reaganomics’ and tries to argue that the growth of laissez faire capitalism has only happened in comparatively recent times as a product of ‘globalisation’. To do this, he engages in some historical sleight-of-hand about Reagan’s supply-side economic policies, claiming that these were really about reforming the US tax system to give incentives to entrepreneurs and workers. But of course they were about far more than this – including attacks on the trade unions to ensure labour flexibility and mobility so as to reduce costs of production. Indeed, some of the very things Roberts now seems to be railing against here.

The fundamental weakness of this book though lies in the lack of solutions proffered. ‘Steady-state’ growth is lauded but there is no serious suggestion about how this can be achieved within capitalism. The most obvious soft-spots Roberts has are for national sovereignty and protectionism, yet he glides over the likely disastrous effects of the latter, which we have of course seen before, and which infamously led to the exacerbation of the economic depression of the 1930s and provoked the subsequent bloodbath of World War Two.

What Roberts has failed to realise is that capitalism has increasingly – over a period of many decades – become a truly global, interconnected system that operates according to its inherent, underlying economic laws. These are impersonal and driven by profit and the competitive accumulation of capital. Furthermore, this proverbial genie of globalised capital is out of the bottle and campaigners for national sovereignty, protectionism and the rest are never going to be able to squeeze it back in again.