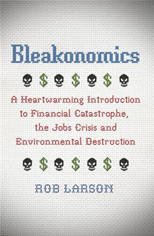 Larson has written an engaging polemic against free-market capitalism and its proponents, focusing on the role of ‘externalities’such as environmental destruction and the inadequate consideration of these by conventional economics.

Indeed, the chapters on capitalism and the environment are amongst the strongest, making very clear –with some well-chosen examples –how the market is unable to allocate resources in an environmentally-friendly and sustainable way. The Deepwater Horizon oil well explosion and spill, and the Great Pacific Garbage Patch (‘a Texas-sized ocean eddy saturated with minute plastic particles’) are just a couple of the externalities of capitalism that Larson highlights to useful effect.

Larson discusses class division intelligently for the most part, along with the excesses of a system that rewards the top one percent merely for their ownership of wealth, though there is a sense that he thinks a regulated capitalism wouldn’t create nearly as many problems as the private enterprise version that exists in America and has spread across much of the world.

He is more consistently effective when he discusses some of the fundamental flaws of conventional bourgeois economics, such as the theories of marginal utility and marginal productivity. An excellent chapter on ‘Economics as a Failed Science’recounts practical research into how businesses make their decisions and illustrates that diminishing returns on the growth in productive capacity doesn’t typically happen in practice. This is important, because one of the contentions of conventional economics is that these diminishing returns limit the production of individual firms and keep these enterprises small relative to the total market. This is a key factor underpinning the notion that capitalism is based on competitive markets that respond to subtle price signals influencing the ebb and flow of new entrants to an industry.

But the research shows this doesn’t happen in practice –economies of scale are a far more important factor for companies, leading them to expand their production to secure cheaper costs per unit produced. This in turn helps create two of the most significant features of capitalism: first, the drive by companies to expand production as if there is no limit to the market for their products, which leads to overproduction and economic crisis. Then the same phenomenon also leads to the concentration of capital into fewer hands, with a resulting tendency towards oligopoly. This was illustrated in the 2007 US Economic Census, which showed that 97 per cent of cigarettes in America are produced by the four largest manufacturers, the four biggest brewers produced 90 per cent of the beer and the top four oil refining firms produced almost half the petrol and diesel.

So, on this front Marx was right again, even though Larson doesn’t mention his analysis directly. Larson does quote, tellingly, from Einstein and his analysis of the anarchy of capitalist production and focuses on the calls for ‘economic democracy’made by the Occupy movement among others as the remedy to the problem. But what he doesn’t say is that this remedy can only take effect when the anarchy of the market and the tyranny of money and prices have been destroyed, to be replaced by common ownership and production directly for use, rather than under a ‘regulated’capitalism.

‘Robots Will Steal Your Job, But That’s OK: How to Survive the Economic Collapse and Be Happy’, by Federico Pistono.(CreateSpace Independent Publishing Platform, 2012) 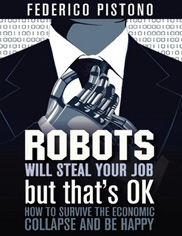 Imagine a world in which supermarkets are replaced by giant robotic vending machines; in which cars drive themselves; and in which journalists are replaced by computer generated reportage. Only, you don’t need to imagine such a world: it’s ours. The technology for all these things exists now (at the very least, at the developmental stage). This book invites us to imagine the impact of the roll-out of these technologies. It’s a sobering thought to realise that hundreds of thousands worldwide work in supermarkets, whose jobs could be extinguished in very short order by this technology.

The centrepiece of the book is an examination of the implications of Moore’s law, which is, roughly, that computer processing capacity doubles every two years. A great deal of the book is spent explaining the implications of this exponential growth. In short, it means the advent of machines which can replicate human-like thought processes. Pistono notes that whether these processes are ‘intelligent’ is unimportant: it’s the work they can do, and the processes they can reproduce that counts. He gives the example of radiographers: computers now have the capacity to ‘look at’ medical images and recognise a variety of conditions. This removes the need for a skilled human, trained over many years, to make the examination. As the book notes, though, as with the automated supermarkets, the machines will also displace unskilled labour.

The book is limited in its exposition, beyond telling us these bare facts. Pistono notes that he has not heard any good counter-arguments against the idea of technological unemployment, but his failure to rebut them in detail does not help build his argument. Luckily for us, Marx did address them in his book Capital:

‘The instrument of labour, when it takes the form of a machine, immediately becomes a competitor of the workman himself. (…) When machinery seizes on an industry by degrees, it produces chronic misery among the operatives who compete with it’ (Capital v. 1, http://www.marxists.org/archive/marx/works/1867-c1/ch15.htm#S5).

Marx addressed the ‘theory of compensation’: ‘that all machinery that displaces workmen, simultaneously and necessarily sets free an amount of capital adequate to employ the same identical workmen.’ His rebuttal was:

‘The labourers that are thrown out of work in any branch of industry can no doubt seek for employment in some other branch. If they find it, and thus renew the bond between them and the means of subsistence, this takes place only by the intermediary of a new and additional capital that is seeking investment; not at all by the intermediary of the capital that formerly employed them and was afterwards converted into machinery.’ (http://marxists.org/archive/marx/works/1867-c1/ch15.htm#S6)

Marx realises that technological unemployment is off-set, in part, by the increased demand this will create in the branches of industry that supply the newly mechanised fields of production. The extent to which these will soak up some of the workers made redundant by machinery, however, ‘depends, given the length of the working-day and the intensity of labour, on the composition of the capital employed, i.e., on the ratio of its constant to its variable component’ (a ratio Marx termed the Organic Composition of Capital). Marx also identified a growth in luxury production and of the servants (what we would now call ‘service industries’) as a result of the improved productiveness of the factory system.

These off-sets would be of little help, however, if all industries were simultaneously and continuously subject to more and more technological innovation.

Pistono’s book is of little help in addressing these problems. The solutions put forward are frankly laughable: we all will have to learn to get by with less and be happy with it. Drive less; insulate your house; grow your own food: these are the suggestions put forward. These are all well and good if you own a patch of land (or even your own house) but absolutely useless for the millions of propertyless semi-skilled and unskilled workers of the world. Millions in mega-slums are already showing us how to make do with less.

At best, this book is a useful primer to introduce people to the concept of incoming and widespread technological unemployment. It is hampered by its lack of detail in explaining the debates around the issue and its abject failure to present anything like a sensible response. At its best, it is a heartfelt tract, with some useful facts and bibliography. 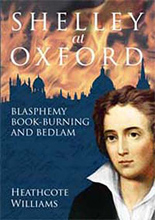 Sadly, for this reviewer, Heathcote Williams disdains the discipline of what would have been called prosody in Shelley’s day. Still, in these 30 pages of free verse, the language is Shelleyian, as is the anger and contempt for the latter-day version of capitalism.

Sub-titled ‘Blasphemy, Book-burning and Bedlam’ Williams’s poetic narrative depicts the reaction among the bishops, aspiring bishops and potential managerial functionaries of the Christian church in 1811 when confronted by a pamphlet written by a 19-year-old Oxford student which challenged the sacred bona-fides of their founder.

A young upstart of impeccably aristocratic descent had written a pamphlet affirming The Necessity of Atheism here! In the sacred precincts of class-orientated, male-dominated Christian culture. Obviously there had to be a Christian response to this attack on the sinews of faith in God and the church system. Oxford bristled with divine erudition and an abundance of faith. But faith was simply belief without knowledge and the core beliefs of Christianity were logically unsustainable; so the holy men of Oxford and its wider hinterland turned to its traditional processes of defence: fear, intimidation and suppression

Heathcote Williams says now, with the forthrightness of Percy Shelley:

‘A theological mafia with every whim indulged
By their colleges’ underpaid servants
Which is hired to cook up the date of Creation
Or to invent the location of Eden.’

Oxford and its professors of myth abandoned argument in favour of direct action. The single bookshop that had been persuaded to take The Necessity of Atheism was threatened and ostracised; the book was publicly burned and the author expelled for thinking out loud. Ten years later, when the news of his death by drowning was made public the holy ardour and charity of Christianity was expressed thus in the columns of the London Courier:

‘Shelley, the writer of some infidel poetry has been drowned; now he knows whether there is a God or no.’
RM 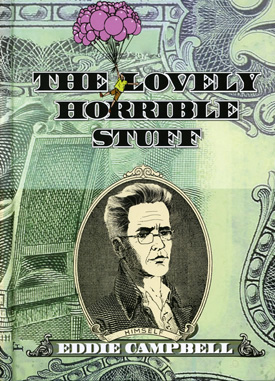 This is not so much a graphic novel as a graphic essay. Using sequential art, the comic book author/artist Eddie Campbell delves into the emotional and familial effects of money. It is apparently autobiographical, showing how money has intruded on his work and into his personal life, detailing, in particular, a long-running family feud with his father in law.

It then segues into a discussion of the stone money of Yapp, and how it has come to be used (perhaps, it suggests, erroneously) in economics lectures and theory. This leads him to a sufficiently weighty image upon which to close his meditations.

Its narrative and art help to illustrate the hold that the ‘lovely horrible stuff’ has on our lives, and perhaps it has more reach than any number of detailed textbooks on economics. It doesn’t draw any conclusions.