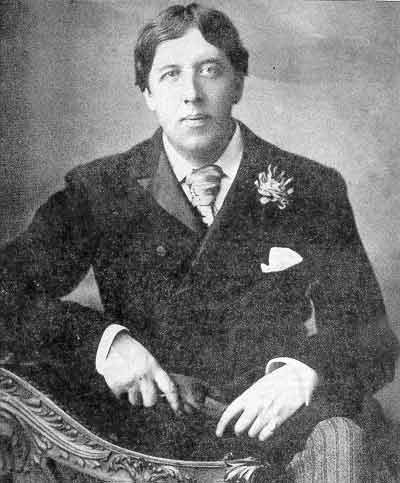 Oscar Wilde died a hundred years ago this month, in exile in Paris. This will be the occasion for a lot of talk about his achievements and accomplishments but we doubt that much will be said about the fact that he once wrote a socialist pamphlet. So this is a good time to take another look at Wilde’s The Soul of Man under Socialism, which was first published in February 1890.

Without necessarily agreeing with every last word in the essay, we would accept that much of it is as true and as relevant today as it was 110 years ago. (Don’t worry about Wilde’s use of the word “soul”—he clearly means “mind” or “spirit”, and obviously wrote “soul” because, as a virtuoso literary craftsman, he savoured the euphony of the word with “Socialism”.) To start with, he realized that socialism and communism mean the same thing:

“Socialism, Communism, or whatever one chooses to call it, by converting private property into public wealth, and substituting co-operation for competition, will restore society to its proper condition of a thoroughly healthy organism, and ensure the material well-being of each member of the community. It will, in fact, give Life its proper basis and its proper environment . . . Each member of the society will share in the general prosperity and happiness of the society.”

Wilde condemns the demented rush after money that capitalism demands of all its subjects. In capitalist society, “man will kill himself by overwork in order to secure property”. No one is free from this basic imperative. “There is only one class in the community that thinks more about money than the rich, and that is the poor. The poor can think of nothing else. That is the misery of being poor”. Furthermore, “why should they be grateful for the crumbs that fall from the rich man’s table? They should be seated at the board, and are beginning to know it”.

The rich salve their consciences by disgorging at rare intervals a minute fraction of their loot. But charity, however well-meaning, is no answer:

“Their remedies do not cure the disease: they merely prolong it. Indeed, their remedies are part of the disease. They try to solve the problem of poverty, for instance, by keeping the poor alive; or, in the case of a very advanced school, by amusing the poor. But this is not a solution: it is an aggravation of the difficulty. The proper aim is to try and reconstruct society on such a basis that poverty will be impossible. And the altruistic virtues have really prevented the carrying out of this aim. Just as the worst slave-owners were those who were kind to their slaves, and so prevented the horror of the system from being realized by those who suffered from it, and understood by those who contemplated it, so, in the present state of things in England, the people who do most harm are the people who try to do most good . . . It is immoral to use private property in order to alleviate the horrible evils that result from the institution of private property. It is both immoral and unfair.”

State capitalism, particularly when imposed by an authoritarian state, which many people confused then and confuse now with socialism, was no answer:

“Of course authority and compulsion are out of the question. All association must be quite voluntary. It is only in voluntary associations that man is fine . . . If the Socialism is authoritarian; if there are Governments armed with economic power as they are now with political power; if, in a word, we are to have Industrial tyrannies, then the last state of man will be worse than the first.”

Government itself will disappear in socialism: “The State must give up all idea of government . . . All authority is quite degrading. It degrades those who exercise it, and degrades those over whom it is exercised”.

Wilde saw that there would have to be a revolutionary change in the economic basis of society, and that this would have inevitable repercussions in the way people behaved:

“When private property is abolished there will be no necessity for crime, no demand for it; it will cease to exist . . . Though a crime may not be against property, it may spring from the misery and rage and depression produced by our wrong system of property-holding, and so, when that system is abolished, will disappear . . . Crime will either cease to exist, or, if it occurs, will be treated by physicians as a very distressing form of dementia, to be cured by care and kindness.”

Who will do the dirty work? Machinery will do it, said Wilde. (And, of course, machinery is enormously more developed now than it was in Wilde’s day to do all the jobs which people do not wish to do manually.) “All unintellectual labour, all monotonous, dull labour, all labour that deals with dreadful things, and involves unpleasant conditions, must be done by machinery”. This will release each individual to help the community in his or her own way by doing service or producing things which will satisfy each person’s need to be active, to contribute and to help. Wilde summed it up: “The community by means of organization of machinery will supply the useful things, and . . . the beautiful things will be made by the individual”.

“Private property has crushed true individualism, and set up an individualism that is false . . . With the abolition of private property, then, we shall have true, beautiful, healthy individualism. Nobody will waste his life in accumulating things, and the symbols for things. One will live. To live is the rarest thing in the world. Most people exist, that is all.”

If these ideas had been accepted and acted on at the time, what an enormous amount of human misery would have been avoided.