Why did the US invade Somalia?

The current crisis in Somalia is, in the first instance, a cold war hangover—a 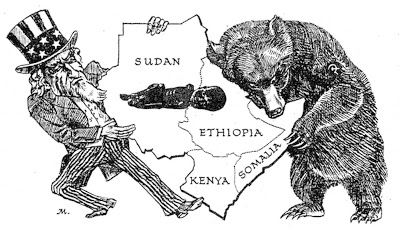 headache caused by the old conflict between Western market capitalism and Russian state capitalism. That the United States should see itself as the remedy to the problem is little more than the hair-of-the-dog philosophy. For it was the United States and, to a lesser extent, the old Soviet Union that created the crisis in the first place.

For well on 30 years superpower aid was essential to the existence of the dictatorships in the Horn of Africa which had few means of keeping control other than by military coercion, made possible by US and Soviet aid.

For over 30 years the US and the Soviet Union poured weaponry into the Horn— Somalia, Ethiopia and Sudan. In the ten years before Ethiopia declared itself a “Marxist” state, the US gave Haile Selassie more military assistance than the rest of Africa combined (Africa consists of over 40 countries). The cache included 1,400 tanks, 1,000 heavy guns and 140 fighter bombers. In all, Ethiopia received $8bn worth of aid.

In Somalia, where 10 percent of the- GNP went on weapons, the statistics were not much different. During Said Barre’s reign, of all international assistance received, 93 percent of it came from the US. Almost 50 percent of this aid was in arms imports. In the decade 1979-89, the US gave Barre S500m in arms.

Said Barre, who took power following a military coup in Somalia in October 1969, soon realized the advantage of his country’s geographical position and the possibility of attracting superpower aid.

Barre, who claimed to have embarked on the path to “Scientific Socialism”, saw his country stricken with famine by 1972. Because of the links he had forged with Moscow, he was able to secure the use of Soviet planes to airlift 140,000 starving Somalis to more stable areas. This is arguably the sole redeeming act he will be remembered for, in spite of the fact that it set a precedent for large-scale superpower assistance.

The assistance Barre had received from the Soviet Union heralded his regime’s increased reliance on Moscow. Development of the northern port of Berbera as a Soviet naval base, the import of thousands of tons of weapons and the arrival of 6,000 military advisers were soon to follow.

The Ogaden region of Ethiopia, which had been kindly ceded to Ethiopia when Britain had an influence in Somalia in 1954, and in which many Somalis continue to live today, became one of Barre’s chief goals.

In July 1977, Barres forces took advantage of internal disorder in Ethiopia and invaded the Ogaden, with the full co-operation of Soviet military advisers. Without warning, in an extraordinary act of tergiversation, the Soviets began airlifting $2bn worth of arms to Ethiopia. Military advisers who had co-ordinated the Somali assault on the Ogaden were flown overnight from Mogadishu to Addis Ababa to direct the counter-offensive.

Securing Saudi promises of financial assistance with which to continue the Ogaden campaign, and accepting a condition where Somalia would rekindle its friendship with the West, Barre kicked out the remaining Soviet personnel in the hope of receiving aid from the United States.

Barre was offering his country on a plate and the US almost snatched his hand off. Somalia was even prepared to forget its territorial claim to Northern Kenya for admission into the Western bloc. Barre was, however, disappointed that his new backer would not support Somalia over its Ogaden campaign, the US not wishing to contemplate the dilemma of being on the losing side. A more harmonious relationship between Kenya and Somalia meant that the region could be more readily incorporated into the Pentagon’s Persian Gulf strategy—a useful base for the Rapid Deployment Force that would balance out the Soviet invasion of Afghanistan.

By late 1980, the US had secured a defence pact with Somalia which gave US forces access to air and naval bases including the Soviet-built port of Berbera. US aid was pouring in by now and by 1987 Somalia was stockpiling weapons. Barre, though, felt that US aid was not coming fast enough and struck up loyalties with the Soviet Union again in 1988, the same year he clinched a deal for massive arms supplies from Colonel Gadaffi.

“Scientific Socialism” this certainly was not. When Barre took power Somalia was self-sufficient in food. By the mid-eighties Somalia was amongst the most food-dependent nations in Africa. Somalia was a state capitalist dictatorship under Barre, when it was easier to arm a man than to feed him. It mattered little to the superpowers that the Horn countries lived under constant threat of drought and famine, the well-being of the peoples of the Horn was of secondary importance to the actual geographical location of the region.

Peace was never going to be a long-term luxury here. Regional conflict and internal strife were made all the more likely because any gain by one side was soon going to be cancelled out by increased superpower aid to the other—a similar situation had existed during Iraq’s war with Iran.

Somalia under Barre slipped into chaos, with the US doing their all to assist, supporting him all the way and making little or no attempt to think that things could be otherwise. As the cold war came to an end and the threat of “communism” evaporated, the US pulled out, dropping Somalia in the proverbial shit.

When the US abandoned Barre for good in January 1991, Somalia was already in the early stages of turmoil. Clan leaders and warlords began their struggle for power and the crisis in Somalia deepened when famine hit. Barre soon realized he could not hold power much longer and fled the country.

The deployment of 30,000 US marines in Somalia is the second time in as many years the US has invaded a Moslem country— “invaded” because this time the US were not invited. All that was missing from the beaches of Mogadishu when US troops came ashore on the morning of 8 December was Audie Murphy and a clapperboard. The whole operation looked carefully prepared for the worlds media—an advertisement for a failing capitalist superpower that can only assert itself on the international stage by ostentatious militarism.

As one UN observer noted:

The operation stinks of arrogance. All this bullshit about 80 percent of food being looted and all that—it’s all very well stage-managed by the US. The whole operation is a test case for future conflict resolution. It’s as if the US had a new vaccine they wanted to test. Now they have found an animal to test it on.

It is probable that US forces have been shipped to Somalia under the cover of a humanitarian mission to be ready again as a Rapid Deployment Force. Possibly the biggest threat to US interests, now that the former Soviet Union is out of the scene, is Islamic fundamentalism, which sees the US as the “Great Satan”. North African states are already viewing the US operation as something of a check on Khartoum for its backing of Islamic fundamentalist groups in North Africa and the Arab world.

Recent IMF austerity programmes initiated in the Horn have not helped the current crisis. During the great famine of 1985, Eastern Sudan was producing 800,000 tons of grain—not for home consumption, but for export to pay off IMF loans. At the same time. “Marxist” Ethiopia was exporting thousands of tons of green beans to Britain.

The New Internationalist (December 1992) was right to speak of starvation as being the “result of unequal power in the market”. In the modern world, profit is the name of the game and all players must abide by the rules. There is nothing altruistic about the IMF or the World Bank:

The World Bank and the IMF have pressured Horn governments to adopt market-oriented strategies based on agriculture exports. Their main priority is to get the regional economy in a good enough state to meet its debt obligation and compete on the international market.

Capitalists could easily add a footnote to this: the sooner the US troops stabilize Somalia, the sooner Somalia can finish paying these debts.