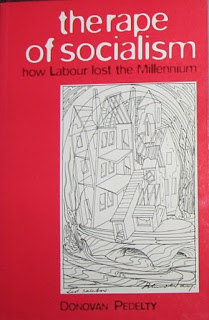 This is an important book. Not on account of its length, of nearly five hundred pages although if Pedelty had left any gaps there would be a rush of nit-pickers to point out that there, precisely, were the holes in his argument. Instead he protects his flanks with an elegant run-through to how we got to where we are from where we were.

The first hundred pages deal with the Conservative Party and where it came from, right up to the hijacking at the beginning of the 1970s by a cabal of largely lumpenbourgeois elements (lower “middle class” to you, dear).

His account of the party’s origins is detached and free of bombast, however cynical and scoundrelly his subjects were. They are here, the Salisburies and the Churchills, Burke and Bagehot, Peel and Disraeli. Those of us who are not historians are led through the minuets and gavottes of the ruling élites in lucid style. We learn that the Conservative Party never trafficked in ideology or was ever much taken with ideas. What it was about was always power. Promise anything, get elected, and do what you want. A week is a long time in politics.

Parliament never did deal much in policies or ideas and the Tories have never had any—with the exception of Thatcher’s and that was pinched.

The scenario, with Labour getting the message and pinching the Tories’ idea, i.e. not to have any idea, has caused anguish and confusion in Lord North Street. The Gentlemen’s Party, devoted to “property and paternalism” had been taken over by the offspring of small traders and professionals who had to grammar school and thence to Oxbridge, and the public school lot were elbowed aside. The new lot were just as keen on getting some property but were not so worried about paternalism.

The other four-fifths, and more important part, of the book deals with the Labour Party and its background, but particularly and in detail with its post-World War II history. For those who lived through the period, it is salutary to be reminded of the follies and buffooneries, the clowns and the arseholes who strutted their Andy Warhol “fifteen minutes of fame”. For those who weren’t around, the book is a valuable corrective to the official version in helping them to make sense of our little bit of the world.

There are more things in heaven and earth than are dreamed of in our philosophy. We are not alone and Pedelty is the proof of it. Despite his scholarship, he is no Marxist (and neither was Marx, of course). He is coming in from a totally different direction. His inspiration is Kropotkin. But unlike some anarchists, he is not lairy of the slog of trying to find out just how the rip-off takes place, and he does it without the brain-deadening and thought-excluding pseudo-Marxist jargon that often accompanies otherwise worthy efforts.

Pedelty’s evidence makes uncomfortable reading for apologists of all the major parties. Tories were responsible for as many reforms as Labour. They drafted the Education Act, making higher education a possibility for the proles. They had anticipated the Welfare State in the late 1930s, and the groundwork was supplied by William Beveridge, a Liberal. They were all for consensus just as Whigs and Tories had been a hundred years earlier, and he quotes Hazlitt: “rival stagecoaches splashing each other with mud but travelling by the same road to the same destination”.

And from those same Whigs (whose laissez-faire creed was exhumed by Thatcher and Co.) to the Labour Party of our time, none of them wanted to allow the people control over their own lives. From Bagehot, who feared that competing before the swinish multitude for support might cause Whigs and Tories to lose control over them, to Labour’s stage-managing of its conference so as to keep out unwelcome voices, a lid has been kept over things.

Pedelty’s conclusions, entitled Hope Deferred, are that while Labour might abandon all commitment to pseudo-socialism “without serious damage; it cannot without dishonour desert the cause of social justice”. But if political power excludes the possibility of social justice, what then? If a market economy (controlled or free), depends upon unemployment (the reserve army), and relative scarcity (otherwise glut and collapse), not to mention other integral features like war preparation (the continuation of diplomacy by other means) and crime (the most efficient way of pursuing self-interest), how can we hope for social justice?

Thus surely is what it is all about. A system is a system is a system. Not a group of unrelated particles. They function as a unit or not at all. Systems have their built-in homeostasis, their self-guiding mechanism, their negative feedback, like the ball-valve on my lavatory flush or the thermostat on the radiator. Interfere with them and you will be flooded or the boiler could blow up.

But Pedelty knows all this. We all know there is a paradox. Systems can only change all-of-a-piece because what we are talking about is not things but the relations between them. So what do we do meanwhile? Life must go on, life will go on because of what we are, human beings, and we will defend our corner as best we can. But if we try to square the circle, to make the system behave other than how it can behave, we shall repeat the tragicomedy of Labour during the last hundred years.

Pedelty goes back for an answer to earlier figures who saw more clearly that trying to reform the system or introduce some follow-my-leader solutions were doomed from the start, and concludes that we must choose: “Fighting on to reignite, regenerate, repropagate, those brave ideals dreamed by the utopian heralds of a new society.”