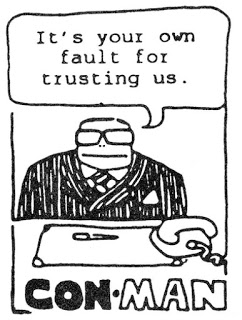 If the election campaign proved anything it was that slick, well-produced TV is not necessarily the most interesting. Most of the election coverage was well done if not flawless in its use of presentational techniques, graphics and virtually seamless continuity. And yet much of it was still deathly boring and irrelevant. Indeed, despite its slickness, the specially extended BBC1 Nine O’clock Election News lost a whole tranche of viewers as the campaign progressed.
One of the few programmes to eschew such modern TV professionalism didn’t attract a terrifically large number of viewers either — mainly because it was up against soap operas and football — but Spot The Difference (Channel 4. 8pm, April 9) was almost unique in that it informed its viewers about things worth knowing. To that extent, it was more informative and watchable than almost anything else.
The presence of a small, insipid audience, poor programme structure and horrendous editing simply did not matter as the message was all. And the important message was this — that without forewarning it is virtually impossible to tell the difference between randomly selected passages on policy from any of the main parties of capitalism that dominate the political agenda. Even the most dedicated political anoraks, who have spent hour after hour poring over the party manifestos and policy statements, cannot do it with any degree of certitude.When the presenters plucked out a sound-bite or policy goal from the literature of the Tories. Labour or Liberal Democrats the most common reaction from the panellists was ’’well . . . it could be any of them really!”
Really saying something
Although there is now an unprecedented emptiness about capitalist politics, it is not that the main parties are saying nothing at all. A lot of their pronouncements are just froth and bubble — but quite a bit of the time they are saying something. It is just that on most issues they are basically saying the same thing.
They all believe that the capitalist class (usually referred to simply as “business”) creates wealth rather than legally steals it from those who do actually create it — the wage and salary earning working class.
They all believe that the free market and competition offers the most efficient and viable method of producing wealth ever conceived by humankind, despite the untold misery it has caused but can’t do anything about.
They all believe in state repression of those who try to “buck” the system or who are denied access to wealth on the grounds that they are not part of “the business community”, and who commit terrible crimes like joining trade unions to defend their meagre interests in the market place.
They all believe in the  necessity of a “strong defence capability” to safeguard the interests of Britain and the British — a Britain where one person owns more wealth than nineteen of the rest of us put together on average and where the majority’s stake in “the national interest” is little more than a huge mortgage and a second-hand car.
And they all believe that they — the guides and beneficent manipulators of our economic and moral interests are capable of bringing wealth and success to the mass of the population.
It is because of all this that a programme like Spot The Difference has its uses. Few but the most bigoted or ideologically brainwashed can now believe that there is any meaningful difference between the parties of the market economy. The downside is that such programmes do nothing to offer real hope, real encouragement or a real sense that things can be different. In the present political climate they merely reinforce the spread of cynicism and apathy among an already downhearted and dispirited working class.
It is precisely for this reason that journals like this — and those who read it — are so important. We do not constitute a huge political force and are not as yet a political pressure to be truly reckoned with — but we do offer one thing. A scientific and logically-arrived at view that is able to account for society as it is. and has a clear, exciting and practical vision of how it really could be. Without us it would indeed be a cynical, cold and miserable outlook for humanity. With us — and more importantly with you — organising for genuine change, there could yet be a ray of hope. As a well-known children’s TV programme used to put it a few years back — get up. turn off the TV set, and go and do something less boring instead.
Dave Perrin