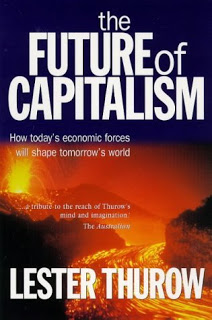 The Future of Capitalism by Lester Thurow (William Morrow, New York, 1996)
As a defence of capitalism and an attack on socialism, this is not a particularly unusual or original book. Dozens of similar texts have been published over the years, though the details get updated. We would not have paid much attention to it. except that from time to time it is a good idea to remind ourselves and others of the techniques by which support for capitalism and opposition to socialism is constructed and taught.
Lester Thurow isn’t anything special, either. An American professor of economics, he is described in his book’s blurb as “an eminent commentator on the global economy and a shaping voice of US economic policy”. (Remember that publishers routinely ask authors to draft their own blurb.)
Imagine that you are one of Thurow’s students. You have listened to him patiently while he expounded the ideas in his latest book. He invites questions. confident that they won’t be too difficult or disrespectful. You surprise him as follows.
In your book, you tell him. you write a lot about capitalism and socialism. For you. “Capitalism postulates only one goal— an individual interest in maximizing personal interests” (p.27l). Wrong on both counts! Capitalism is the system of minority private ownership of the means of wealth production and distribution, the majority having only their labour power to sell to earn a living—only the profit of the privileged class is maximized. Socialism is the system of society, never yet established anywhere because it requires a majority of convinced socialists. based on common ownership and democratic control, and production solely to meet human need. What you call socialism (government ownership) is state capitalism.
You write, you go on, about the Soviet régime and claim that “In the contest between individual values and social values, individual values won” (p.5). Actually both capitalism and socialism require a combination of individual and social values. The difference is that capitalism means capitalists compete for markets and workers have to compete for jobs, whereas socialism means that all individuals (including former capitalists) have free and equal access to the wealth the world is capable of producing. You repeatedly describe socialism as a threat, as something to fear. Even when you refer to it as a challenge (p. 116) you link it with the military threat from “communism”. You should understand that, as names for the system that will replace capitalism, socialism and communism are interchangeable but that what you call “communism wasn’t really communism or socialism but state capitalism. Why should anyone fear a system that means abolishing war, poverty, privilege and exploitation of the majority by the minority?
Finally, you tell Professor Thurow, there’s a strong clement in much of what you write that can best be described as bullshit. What are we to make of this: “Given our new understanding of the tectonic forces altering the economic surface of the earth and the period of punctuated equilibrium that they have created, let’s return to the problem of constructing a capitalistic ship that will safely take us into an era” (p.326). You may wish to be all at sea on such a craft, but socialists have a much more worthwhile destination.
After this, Professor Thurow will, no doubt, be highly motivated to ensure that you don’t attend any more of his lectures.
Stan Parker