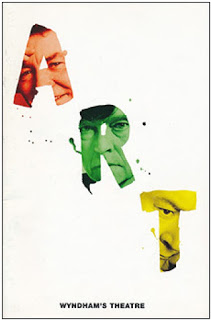 Art is an odd play. Some critics see it as a populist attack on modern art; others believe it to be about friendship. It runs for barely 90 minutes and it is packing them in—queues every night for returned tickets. When I called for tickets the clerk at the booking office told me—with a mixture of pride and of resignation born of hard work—”It’s the hottest ticket in town.”

The plot is simply stated. Serge buys an abstract painting for about £20,000. His friend, Marc, is uncomprehending. To Marc the canvas is but a white rectangle—although he does admit that he can see some whitish diagonals and some pinkish dots. But what can Serge see in it? Marc is baffled. He thought he knew Serge, and now this. He feels undermined—betrayed perhaps. In the event pushed by Serge into saying that he likes it. he explodes and calls it “shit”. Yvan. a mutual friend, accommodating by nature, is brought in to mediate. But far from successfully resolving the conflict, he is unwillingly drawn into the drama. Three friends soon become three men at odds with one another.

At the end the audience was agog. I’ve rarely heard so much animated conversation at the end of a play; so many different opinions wafting on the air. Retiring for a pizza we talked for longer than the play had run. What did it all mean? All four of us had seen it differently, and had different points of view. As we chatted I found it easy to understand why the critics and the audience had been so divided. What had been presented was capable of many interpretations, so that the opinions of individual members of the audience probably revealed more about them and their particular knowledge and prejudices than about what they had seen and heard.

I was reminded of similar discussions about politics. Talk to folk about politics and most people will retain some variant of the conventional opinions offered in the Sun, Mail or Telegraph. etc. Only a few people, and conspicuously members of the Socialist Party, are able to see beyond the obvious to deeper levels of reality. Thus socialists see politics in terms of historical materialism and class conflict based on ownership of the means of production and exchange. And here, in reacting to what they had seen on stage, people were bringing a similar range of insights to bear; ranging from the kind of crude populist antagonism found in the popular press to sophisticated critical perspectives and insights.

I guess there must have been a lot of quasi-Sun readers in the audience. The biggest cheer of the evening greeted Yvan’s admission that, yes, he too thought the picture was “shit”. But Yvan was clearly lying. His was a response born out of pain and a desire to hurt Serge. Not that many in the audience seemed to care, even if they understood. They laughed uproariously at Serge’s plight. I confess to feeling very uncomfortable when people sitting close to me find the pain of characters on stage a matter for amusement. We smile smugly at the thought that it was our primitive ancestors who cheered at public executions, but you don’t have to sit long in theatres and cinemas to realise how much capitalism has brutalised people’s sensitivities. On such occasions I am reminded of Orwell’s description of the progress (sic) of capitalism: “If you want a picture of the future, imagine a boot stamping on a human face—forever.’’

Early in the play Serge observes to Marc “You have to understand the rules (of modern art) before you can make an informed comment.” Socialists know this to be “true” of the world of economics and politics. You have to go beyond the immediate, the self-evident, if you are going to get any kind of purchase on how society works. What people need if they are to understand their everyday lives is a set of analytical tools— based on historical materialism, the labour theory of value, and the class struggle. A similar set of tools seems necessary if we are to understand art. The ideological apparatus of capitalism—including the so-called education system, newspapers, public service (ho, ho) broadcasting, and the other media—is intent on not providing such explanatory frameworks. The reaction of many in the audience to Art is one measure of its success.
Michael Gill