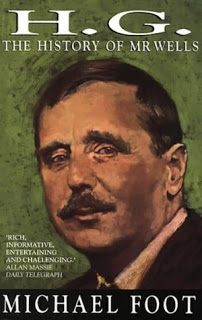 H.G.: The History of Mr Wells by Michael Foot, Black Swan £7.99.
According to its author, “this is a book about Socialism, but personalities will constantly be allowed to intrude”. In fact, it is not about Socialism at all; rather, it consists of Foot’s defence of one of his political heroes against a variety of crimes that have been laid at his door, from elitism to racism and sexism.
There is no doubt that HG Wells was an enormously influential writer in a number of fields, from pioneering science fiction to social novels, from popular history to political essays. As a one-time Labour parliamentary candidate and member of the Fabian Society, he was naturally associated with left-wing ideas and a variety of reformist causes. There is no denying the power of some of Wells’s depictions of poverty, and I for one love the following passage from The Time Machine, part of a discussion of the potentialities of travel into the future:

“‘One might invest all one’s money, leave it to accumulate at interest, and hurry on ahead. To discover a society,’ said I, ‘erected on a strictly communistic basis.’”

Foot of course doesn’t quote this, and instead offers long justifications of some of Wells’s conduct towards the various women in his life.
In fact neither Wells nor Foot show any understanding of Socialism. Wells wrote a number of books set in the future as he imagined it might be. or hoped it would be. Broadly the same sort of picture is presented in these writings. and there is little doubt that in essentials it represents Wells’s own ideas about how society should be run. Firstly, there is a naive acceptance of technological and scientific advance. and the benefits this will bring. Secondly, there is an end to nationalism and the establishment of a world state, run by a global government. Thirdly, there is an élite which administers this world state in a dispassionate and altruistic way. In A Modern Utopia (1905) this élite consists of the samurai, a “voluntary nobility”. Foot notes that the young Wells thought scientists more reliable and disinterested than politicians, and the samurai is a projection of Wells’s faith in knowledgeable and public-spirited people as the most suitable to run society. Foot’s defence of Wells against the charge of élitism is pathetic: Wells was “avidly read. say. in the Workmen’s Halls in Wales” and so cannot have been an élitist!
It was Wells who coined the phrase “the war to end war” as a description of the First World War. He had often warned against the possibility of a global conflict, but he saw war as being caused not by economic considerations but by militarism and nationalism (which was one reason for his advocacy of a world state). In fact he supported the First World War. on the grounds that the enemy was German militarism, and he offended many friends by putting this view in the jingoistic gutter press. Even Foot has trouble excusing this.
The following passage from A Modern Utopia gives a good idea of the functioning of the world state as envisaged by Wells:

“It will maintain order, maintain roads, maintain a cheap and efficient administration of justice, maintain cheap and rapid locomotion and be the common carrier of the planet, convey and distribute labour, control, let, or administer all natural productions, pay for and secure healthy births and a healthy and vigorous new generation, maintain the public health, coin money and sustain standards of measurement, subsidise research, and reward such commercially unprofitable undertakings as benefit the community as a whole …”

This is a clear depiction of state capitalism, and there is little doubt that this is what Wells stood for. Foot’s study has to be seen as an attempt to defend such ideas now that the Labour Party has abandoned any commitment to nationalisation or a comprehensive welfare state.
Paul Bennett