A Word in Your Ear: Spiv Culture 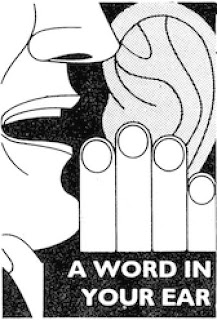 Britain has become a nation of spivs and the new national hero is Arthur Daley. Only fools, horses and used-car salesman would find reason to celebrate this victory of commerce over common decency as something to be amused by. There is a foul smell of dirty money in the air and the polluters are more often than not would-be entrepreneurs with one foot in the capitalist class and the other on a banana skin. Wanna buy a fake Rolex, gov? Anyone for shares in a company that doesn’t exist? Or timeshares? Or a chance to rob old ladies without doing time?

I happened to find myself seated in yet another Indian restaurant (“Does this man do anything else with his life?” readers may ask) and at the next table were two oafish drunks who slurred their way through several brandies and some nosh talking about how they were going to get stinking rich. One of them was involved in selling in-flight confectionery to a well-known airline. They both looked like men who had suddenly discovered that there are legal ways to get rich. “As long as we stick together… [belch]… yeah, stick together, see, and keep the product quality high … [fart]… we’ll be able to corner the market. Trust me . . . [glug] . . . there’s money in these chocolates, mate.” They ended up by shouting abuse at the waiter who had apparently been too slow with their last brandy and by handing round complimentary’ chocolates to people at other tables. So, these were the crooks responsible for making money out of what loosely passes as airline food. These were the cutting edge of the enterprise culture.

These spivs were the boys who loved Maggie because she understood and delighted in the power of money. They liked Major better than Kinnock (who looked like the kind of bloke who would make a loss running a jumble sale), but they prefer Blair to Major because he talks their language. Just as the mud is the natural home of the slug, so the market is the social home of the spiv. Mind you, not the deep end. That is reserved for the multinationals. The 1990s loadasmoncy market-louts are happy to be poking around in the swamp for enough room to make a few grand and buy themselves a villa on the Costa Brava.

There is even a whole area of academia now reserved for training people to become spivs. They call it Business Studies. In fact, the study involved is how to make yourself appear as a respectable spiv. It is the most disreputable area of contemporary education. usually taught by failed bank managers and salary’ slaves with earnest commitment to their slavery. It is probably one of the most useful degrees or diplomas to get in the 1990s. “History? English literature? Theoretical physics? Who needs ’em when there’s a world out there waiting to buy damaged goods?”

The myth that spivs went out of fashion after rationing was abolished and there was no black market for wide-boys to exploit is to miss the point: the true spiv never was the guy with dirty fingernails flogging rationed goods to people with money; the true spiv wears the best of second-class suits and flogs rubbish to people who can’t really afford them. The great business skill of modern capitalism is the sale of useless items by fast-talking crap merchants.

There is an indignity, not to mention an invidious inequality, about living in a society which rewards worshippers of the fast buck. A society which treats nurses like dirt and which allows some people to buy houses in the country, with money made from jerry-building and the sale of the cheap and shoddy, is rotten at its roots. Actually, Arthur Daley was at best pathetic and at worst a rather nasty trickster whose trickery was protected by his ability to buy a minder to keep the innocent away from him. What kind of a society acclaims such entrepreneurs? And yet look around the benches of the House of Lords and you will see more than a few of them sitting there, honoured as thieves of repute. (Remember Harold Wilson’s Honours List?)

Wandering around the streets of Minsk a few’ months ago it was impossible to avoid the constant pull by fast-talking street traders who were determined to flog you a souvenir tablecloth or a pair of old shoes. Their sales talk was incessant, made all the more irritating by the broken American accents and phrases they had picked up from ads on MTV. They will be tomorrow’s graduates of the new business schools being set up to train a new generation of spivs in a country where the ruling crooks used to call themselves communists. No, of course it’s not just Britain which has become a nation of spivs. World capitalism is a system of international spivvery. To hell with it!