Theatre review: Papering over the cracks

Wallpaper by Sophia Kingshill (Bridewell Theatre)
In 1913 Lenin, James Joyce and the founder of the Dadaist school of art all 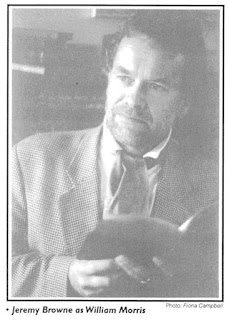 chanced to be in Zurich at the same time. And in Travesties Tom Stoppard imagines them becoming unavoidably involved in a production of Oscar Wilde’s The Importance of Being Earnest which is managed by staff at the British Embassy. The result is an irresistible verbal pyrotechnic in which revolutionary politics, avant-garde art and literature, and the day-to-day lunacies of so-called diplomacy are hilariously admixed courtesy of Wilde’s play.
In Wallpaper Sophia Kingshill  attempts something similar and largely succeeds. She imagines that William Morris and Bernard Shaw “encounter one of Shaw’s creations, Liza Doolittle the upwardly mobile flower seller (of Pygmalion/My Fair Lady) and try to turn her into a socialist”. Wallpaper is described as “a Shavian melodrama portraying the adventures of Mr William Morris, Miss Eleanor Marx and Miss Eliza Doolittle”. The title suggests that it is Morris and his popular image as a designer of wallpaper who is the focus of the play, but this is not the case. It is Shaw rather than Morris who stands at the play’s centre.
Kingshill is clearly anxious to put the record straight and to acknowledge Morris’s activities as a revolutionary socialist, but in this she is only partially successful. The play fails to give the audience more than an inkling of Morris’s political thinking and it avoids, almost completely, an examination of the way in which Morris’s position as a social revolutionary stands opposed to Shaw’s attachment to reformism. And she is not helped in the latter enterprise by articles in the programme by Stan Newens MEP, Denis McShane MP and other Labour Party luminaries, which claim Morris as a key figure in their movement. It’s rather like members of the Flat Earth Society enrolling Copernicus as an honorary member.
Kingshill is at her best when dealing with her characters as people rather than when dealing with their political views. There is a convincing truthfulness about the bluff, avuncular Morris, the mordant, ironic Shaw, and the selfless, benevolent Eleanor Marx, which allows us better to understand their behaviour. And Eleanor’s travails at the hands of fellow socialist(ic) Edward Aveling, should give us cause to ponder. How can those whose own behaviour is based on the selfish pursuit of their own inclinations act as credible advocates of a society founded on fraternity, cooperation and mutual self-interest?
If it seems odd to involve Eliza Doolittle in the seemingly real-life activities of Morris, Shaw, Aveling and Eleanor Marx, Kingshill uses Shaw’s authorship of Pygmalion to good effect. Aveling seems a model for the fictional Henry Higgins, and Alfred Liddle (a friend of Morris) re-emerges as Freddie, Eliza’s rejected swain. Moreover, Kingshill parodies several of the songs and set pieces of My Fair Lady to stunning effect. Higgins’s song in celebration of Eliza’s mastery of upper-class pronunciation “By gosh, she’s doneit”, becomes “You’ve done it. You’ve really gone and done it”, sung by three policemen before a chilling parody of the Ascot racing scene now transformed into the infamous Trafalgar Square siege of 1887. And who would have thought to hear “Get me to the church on time” turned into a celebration of the revolutionary potential of the international working class?
On the night I saw the play a small and inept audience seemed to miss most of the humour and sat silent and passive. Those on stage deserved better; perhaps especially Julia Stubbs who played Eleanor Marx with illuminating sensitivity. and Russell Churney whose reptilian Aveling was splendidly convincing.
People expecting a political polemic will be disappointed — but then perhaps the theatre is not the place for such an enterprise? This said, Wallpaper seems to me to be a considerable achievement. Given more attention to the ideas which inform the revolutionary and reformist positions of the major players, and a more sophisticated realisation of the text, what is already a drama of considerable merit might become a truly significant piece of theatre.
Michael Gill