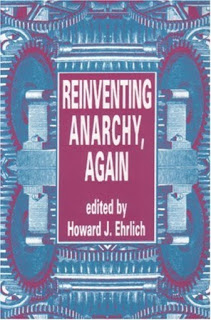 This is an updated reprint of an anthology of modern anarchist writings, mostly from North America, that first appeared in 1979. The aim is to show what anarchists today think rather than what the classic anarchist texts said. It succeeds in this, but at the price of bringing out the two main inconsistencies of anarchism as a political theory: its claims that people don’t have to abide by majority decisions unless they want to and that big is bad.

It was anarchist insistence on denouncing “the tyranny of the majority” and on upholding the right of individuals to do whatever they liked that led William Morris to declare that he was not an anarchist because no society could exist on that basis, certainly not one based on common ownership and common decision-making. Some, though by no means all, of the writers in this anthology do seem to stand for such a society but appear not to realise how inconsistent they are in at the same time challenging the legitimacy of majority voting.

One of the consequences of believing that big is bad is that certain key aspects of capitalism—such as markets, money, and buying and selling—can come to be seen as acceptable provided they only exist on a small-scale; then they become beautiful. This has happened to the four editors of the previous edition of the book who put their names to the incredible statement that “it is hard to conceive of a serious alternative to the market economy”. As “market anarchists” what they envisage as the alternative to existing society is one where there might be no profits, exploitation or a centralised state but there would be local cooperatives and small businesses producing for local markets, local currencies, and small-scale trading between local communities.

In other words, a small-scale, decentralised market economy where goods and services would be bought and sold for use not profit. We can’t go back to this which Marx called “petty commodity production” and. if we did, it would develop again into the large-scale commodity production that is capitalism.

What is needed is not a completely decentralised society without any central institutions. but a proper balance (which can be left to the people of socialist society to work out) between centralisation and decentralisation and the replacement of the market economy by production and distribution directly to satisfy human needs and wants.

Market towns, each with their own currency and where anyone is free to ignore commonly-reached decisions, is not our cup of tea. This said, there are some interesting articles in this book, in particular the ones on work by David DeLeon and Bob Black.