Book Review: Getting means to survive 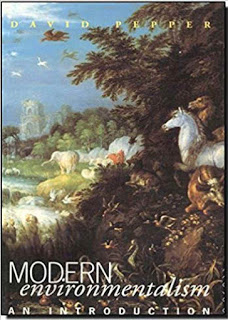 Modern Environmentalism: An Introduction by David Pepper (Routledge, 1996)
This textbook for students provides a comprehensive survey of the ideas of those who are concerned about environmental problems.
The coverage ranges from the sinister Dark Greens and so- called “Deep Ecologists”, with their anti-humanist (and anti-human) philosophy and their irrational Nature-worship, at one end. through other less unreasonable “ecocentrics” who imagine that Green values can be imposed on capitalism (the Green Party), and the reformist “technocentrics” who believe that technological fixes can solve or at least contain the problem within capitalism (the official Establishment view), to, at the other end, people like ourselves who hold that capitalism, with its production for profit and its built-in drives to cut costs and accumulate capital, is the cause of current environmental problems and that humans won’t be able to achieve a sustainable relationship with the rest of nature until it is replaced.
All these views are discussed and compared, including ours (in a section entitled “The moneyless economy and eco-socialist society”).
One point though. Pepper implies that it is an exclusively “ecocentric” position to hold that the things we perceive don’t exist as separate, independent things but are only parts of an interrelated and interacting universe which alone has an independent existence (“holism”, as it is now called) and that everything in the universe is composed of the same “stuff’ or material (“monism”).
It is true that this is a view held by many ecocentrics, but generally in some mystical form. In a non-mystical form it has been the view of Marxian socialists since the time of Joseph Dietzgen in the last century who expounded it under the name of “dialectical materialism” (not to be confused with the official ideology of the former state-capitalist countries which had the same name).
It was in fact because ecology is a science of interrelationships that socialists have always realised its significance. Indeed, because it emphasises the importance of the way living things get their means to survive it is the application to the world of nature of the same approach that Marx’s materialist conception of history takes to human society; it is a materialist conception of the world of living things. As such it has nothing in common with the mystical nonsense with which some Greens and ecocentrics have surrounded it.
Adam Buick