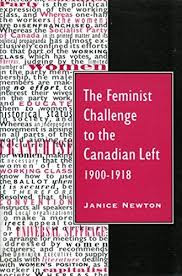 The Feminist Challenge to  the Canadian Left 1900-18 by Janice Newton  (McGill-Queen’s University Press.)
The Canadian Left from 1900-1918 consisted essentially of the Socialist Party of Canada and the Social Democratic Party. The SPC was the Canadian equivalent of the SDF in Britain at the same time, but there was an important difference. Whereas the SDF had a reformist majority and an “impossiblist” minority (some of whom broke away in 1904 to form the SPGB), the SPC had an impossiblist majority and a reformist minority. The Canadian Social Democratic Party was formed when this reformist minority broke away in 1911.”Impossiblism” was a term of abuse invented by the reformists in the SDF to describe their opponents. Basically, it was the view that a socialist party should only seek support on the basis of Socialism and the abolition of the wages system and so should not have any programme of immediate demands. It also involved the view that socialism could only come about when a majority of workers wanted and understood it. The task of a socialist party was seen as being educational—with a view to get workers to become socialist then eventually, when there was a socialist majority winning control of political power — as opposed to advocating reforms to be achieved within capitalism.However, this refusal to advocate reforms did not mean that impossiblists thought a socialist party should oppose them. On the contrary, it was recognised that any Socialist elected to a parliament or a local council should vote for any measure considered to be in the interest of the working class.

The SPC, for instance, in its platform (which it published in every issue of its paper the Western Clarion and in its pamphlets) declared: