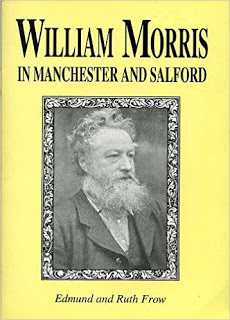 William Morris in Manchester and Salford by Edmund and Ruth Frow, Working Class Movement Library, Salford. £2.50.
William Morris was an indefatigable speaker and writer for Socialism over the last thirteen or so years of his life. Many of his speeches were reproduced as articles or pamphlets, and essays such as Useful Work vs. Useless Toil and How We Live and How We Might Live (the latter republished by the Socialist Party) are well worth reading today. Manchester was one of many towns he visited as a speaker for the Social Democratic Federation and Socialist League.
Morris’s first visit to Manchester was in 1882, but as a businessman not a Socialist. His first furnishing and designing company took part in an exhibition, and this was successful enough for them to open a shop, first in John Dalton Street and later in Albert Square, though this did not last long. By the time he came in 1883 to speak at the Manchester Royal Institution, Morris was a Socialist, and his theme, that riches meant corresponding poverty and slavery, was not popular among the local capitalists. His subsequent visits were to speak to working-class audiences, especially in Ancoats, the world’s first industrial suburb. From 1884 to 1894, Morris spoke almost every year at the Ancoats Brotherhood, an institution founded to provide leisure and educational opportunities for working people. He spoke out of doors too, in Albert Square, and, on what was almost his last visit, to a crowd of two thousand at Trafford Bridge in Salford. His favourite talk, apparently, was on “Monopoly”, an explanation r of the labour theory of value.
This pamphlet, though expensive at 28 pages (9p a page!), is well illustrated, and gives a useful and vivid account of Morris’s activities in the north-west.
Paul Bennett