Pamphlet Review: Not a Private Matter 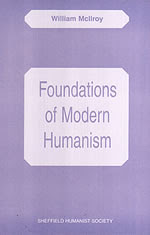 The Socialist Party doesn’t take the position that religion is a private matter, beyond rational criticism. All religions have something to say about how we should live our lives on this earth and, when looked at dispassionately, what they do say is thoroughly objectionable. Of course not all religions say exactly the same thing. They can be viewed as a spectrum: at the one end there are religions such as Taoism which are more philosophies of life than religion proper. Moving through the spectrum we find numerous religions, each offering salvation only through their God, and at the other end we find the three main religions of the twentieth century: Judaism, Christianity and Islam.

In Britain the most important of the specifically atheist organisations is, and has been for over a century, the National Secular Society. Its monthly journal. the Freethinker, is the best of its type and well worth reading for the ammunition it provides against religious superstition. Bill Mcllroy was for many years its editor and is the author of this pithy pamphlet He shows how, as a general rule, religion upholds the existing state of affairs. For instance, take this little ditty penned by a bishop’s wife:

“The rich man in his castle
The poor man at his gate
God made them, high or lowly
And order’d their estate”

His explanation of the foundations of modern humanism, as a rejection of religious beliefs, is a history of the doings of liberal reformers. The writings of Thomas Paine is the most obvious example (although Paine himself was not an atheist). As is usual in this sort of account there is no mention of the socialist argument against religion. But it is from Marx that we have the most useful way of looking at religion—as a narcotic growing out of the material circumstances of life. For humanists, criticism of religion is a process towards the eventual triumph of reason. But they ignore the material conditions which give rise to superstition:

“Consequently, in his worship of the ‘idea’ the bourgeois freethinker is, like the Christian, attributing miraculous powers to the figments of men’s brains” (Socialism and Religion, Socialist Party pamphlet, 1911).

On the new basis of material security and social co-operation, provided by socialism, individuals can gain a sense of meaning in their lives, with hope for a future free from the dead hand of religious belief. Rather than being abolished, religion can be expected to (as Engels said about something else) “wither away”.
Lew Higgins