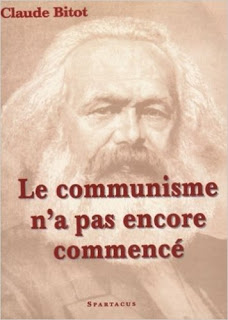 Le communisme n’a pas encore commencé by Claude Bitot, Spartacus, Paris 1995.
This book, whose title translates into English as “Communism hasn’t yet started” presents an interesting analysis of the working class movement over the last 150 years. As it is unlikely to be translated into English we summarise in the next five paragraphs the book’s arguments, before adding our own comments.
Communism (or socialism, as we would normally call it) was not really on the agenda in the 19th century, because conditions were then not yet ripe for its establishment. In fact, if a communist party had come to power in 1848 or if the Paris Commune of 1871 had lasted the outcome could only have been some form of state-run capitalism.
Marx and Engels eventually came to realise this and then placed their hopes not on an immediate seizure of power but on the gradual development of working-class consciousness and organisation leading to the conquest of political power by a party enjoying majority support. But this didn’t work either, as the Social Democratic parties which did emerge were not really socialist parties, but the left-wing of the bourgeois democrats. They expressed the aspiration held by most workers for better conditions within capitalism. The trade unions were similarly an expression of the workers desire to reform rather than end capitalism. Both helped integrate the working class into capitalism ideologically.
The Bolshevik revolution of 1917 was also a false hope. Russia on its own was clearly not ripe for socialism. Some Bolsheviks. including Lenin, realised this; which was why they relied on a socialist revolution occurring in the West, in Germany in particular, to save them. This was a miscalculation; which should have been obvious. Only a small minority of the workers in Western Europe were revolutionary. Most weren’t, as was demonstrated by their actions. For instance, a majority didn’t even vote for left-wing parties. In fact most of the workers in Russia weren’t socialist-minded either; they wanted peace, workers’s control, etc., which was understandable enough, but still amounted to wanting a better deal under capitalism rather than socialism. The end result was (as Lenin himself described it) state capitalism, and the eventual emergence of a new ruling class in the form of a state bourgeoisie.
The reason for the failure of these three different attempts was that capitalism had not yet reached the end of its historical cycle. It was still able to expand production and so offer reforms and increases in living standards. At the same time it was able to ensure that workers did not use their increased free time to develop their socialist education (as Marx had hoped). Capitalism supplied them with circuses as well as with bread.
Capitalism, says Bitot, has now reached the end of its historical cycle. It can no longer offer reforms and improvements; in fact there haven’t been any since the early 1970s. Nor are there likely to be any; on the contrary, conditions can be expected to get worse. This, says Bitot, will generate a socialist consciousness— this time, a majority socialist consciousness—which will put the Communist revolution back on the agenda. This time for real.
An obvious criticism springs to mind. In making both reformist and revolutionary consciousness a mere reflection of economic conditions (capitalism’s ability or inability to expand production and offer improvements) Bitot is clearly being too determinist. But on another point— the implications of a majority socialist revolution—he boldly goes where no previous “left communist” has ever dared go before, by raising the prospect of a relatively peaceful overthrow of capitalist rule rather than the prolonged and bloody civil war they all still cling to.
If millions and millions of workers have become socialist, he writes, we can envisage what will happen;

“in reality, internally divided, on the point of breaking up, the existing power will be ready to capitulate, which will make it not too difficult to knock down. What will be the precise form of this overthrow? Obviously no one can know in advance. But what it is already possible to glimpse is that the capture of power will take place relatively without violence. No doubt the power will be tempted to install a dictatorship, but will it still have the strength, undermined as it will be from the inside? . . . A minority can be crushed in this way, but this can’t hold back for long on immense majority determined to see things through; in the long term the power will be obliged to give up.” (pp. 241-2).

“Some Marxists continue to be inspired by these revolutions of the past and so urge extreme violence against the power, revolutionary civil war, as the only ways possible, while condemning in advance as ‘opportunist’, ‘reformist’, the more peaceful ways of capturing power which Marx himself envisaged for certain advanced countries of the time.” (p. 242).

“If the revolution still has to pass through a fierce civil war (apart from being the equivalent of a third world war) this would only prove that conditions weren’t ripe. The future revolution will take place with a minimum of violence since by becoming the movement of the immense majority it will have radically altered the relationship of forces to the detriment of the tiny exploiting minority, desperately seeking to maintain an exhausted and outdated economic system.” (p. 243).