Pamphlet Review: Greens Should be Socialists 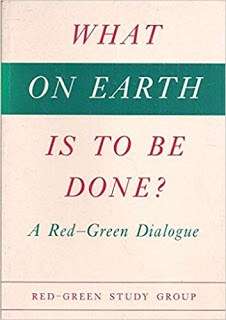 What On Earth Is To Be Done? A Red-Green Dialogue Red-Green Study Group. £3.50.
Socialists certainly do have something to say to Greens: basically, that before production can be carried out in ecologically-acceptable ways capitalism must go. Production for profit and the uncontrollable drive to accumulate more and more capital mean that capitalism is constitutionally incapable of taking ecological considerations properly into account—and that it is futile to try to make it do so.
If we are going to organise production in an ecologically sound way then we must first be in a position to control production, but we can’t control production unless we own and control the means of production. So, a socialist society of common ownership and democratic control is the only framework within which the aims of Greens can be realised. So, Greens should be socialists.
This, however, is not what the “reds” in this pamphlet— mainly former members of the defunct Communist Party, flanked by a couple of ex-Trotskyists and an ex-Maoist— tell their “green” colleagues. Certainly, they do use the word “socialism” but are confused as to what it is. For a start, they refer to the former regimes in Russia and east Europe as “state socialist” rather than state capitalist. But more seriously, they see the market as being compatible with socialism. We advocate, they say:

“a system in which market exchange is retained, to an extent yet to be determined, but market forces are replaced by negotiation coordination”.

In other words, market exchange (buying and selling) good, market forces (Adam Smith’s invisible hand) bad. In the past they would have advocated market forces being tamed by the firm hand of state control; now they envisage them being overcome through the limp wrist of “negotiated coordination” of sales and prices by decentralised communities and enterprises—an unrealistic idea which the Green Party had already come up with without the help of these ex-Leninists.
It’s the idea of an idyllic market economy in which people exchange goods for use—what Marx called “petty commodity production”—but, as Marx demonstrated in Capital, petty commodity production led, logically and historically, to capitalist commodity production where the aim of production and exchange is no longer use but becomes to make and realise profits.
Market exchange leads to the domination of production and society by market forces and, if we went back to the simple market system without profit-making envisaged by the Green Party and this Study Group (which of course we can’t), the whole process of development towards a capitalist market economy would start all over again. Besides, in view of the failure of the iron fist of the Bolshevik dictatorship in Russia to hold market forces at bay, who can seriously imagine that decentralised communities and worker co-operatives could?
No, the answer is to establish the common ownership and democratic control of productive resources. Then the whole concept of the market, of buying and selling, becomes meaningless. Where productive resources are commonly owned and democratically controlled so will what is produced, and the problem will not be to sell it— how can you sell to people what is already theirs? —but how to arrange for people to have access to it on an equal basis.
In our view, it wouldn’t be very long before the principle “from each according to their abilities, to each according to their needs” could apply. That’s socialism—real socialism, not the milk-and-water market exchange economy advocated in this pamphlet—and it’s what Greens, if they are to be logical and consistent, should be working for.
Adam Buick