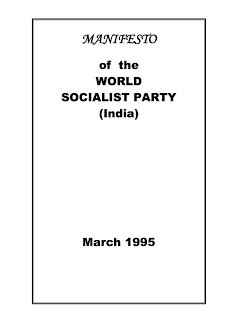 Manifesto of the World Socialist Party (India)
This is the 14,000-word manifesto adopted by our companion party in India at its founding Conference in Calcutta in March. It sets out in clear terms the socialist analysis of the artificial scarcity of the profit system, the rise and fall of state capitalism in Russia and elsewhere, and why nationalism, religion and leadership are incompatible with socialist principles.
The manifesto begins by explaining the political route which the authors took before coming to adopt the principles and analyses of the World Socialist Movement. After leaving the Communist Party of India (Marxist)— the governing party in the Indian state of West Bengal for some years now—in 1982 the group eventually became part of the so-called “Left Communist milieu” who trace their origin back to those early members of the Communist International criticised by Lenin in his pamphlet Left Communism, An Infantile Disorder.
From 1989 on the group began to reject two key assumptions of this milieu. First, that “in 1917 the working class in Russia made a political revolution led by the Bolshevik Party” but which soon went off the rails and ended up as state capitalism due to the mistaken economic policies adopted by the Bolshevik leaders. Second, the need for a transition period “administered by workers’ councils with labour vouchers”. The Manifesto clearly expresses this rejection: the Bolshevik coup was not a workers’ revolution of any kind and had nothing to do with socialism: “Bolshevism or Leninism is state capitalism and by definition all questions of Leninism are state capitalist”.
Labour-time vouchers are rejected as being “a form of economic rationing with exchange” since inevitably such vouchers would begin to circulate and so become money, whereas socialism is a society of abundance in which there is no need for any general unit of account: “Abundance does not have a measure of measures. For us its only measure is satisfaction of needs.” In fact, a long section is devoted to producing the statistical evidence to show that once the artificial scarcity and organised waste of capitalism are eliminated, enough food, clothing, housing and other material goods can be produced to allow every single person on the planet to live decently and for the implementation of the principle of “from each according to their abilities, to each according to their needs”.
The WSP (India) regards the Indian unions as not being genuine trade unions in that “unlike Europe and America, most of the big trade unions have been organised from above more as fundraising, vote-catching political subsidiaries of self-seeking ‘leaders’ than as spontaneous grass-root, independent and autonomous organisations of the working class to defend their economic interests“. Because of this, and especially the fact that rival unions are linked to rival political parties and used to serve their ends, our Indian comrades say that Socialists in India cannot work within them but should instead seek to encourage workers to organise democratically outside them on the basis of regular general assemblies and recallable delegates. Since clearly they have a better knowledge of the situation in India then we do, we willingly defer to their judgment. In any event, the trade union question is one over which Socialists can, and do, have different views.
The Manifesto can be purchased from us at 52 Clapham High Street. London SW4 7UN (£1 post paid, cheques payable to “The Socialist Party of Great Britain”). It will also be available in Bengali, the world’s sixth language. when supplies arrive from India.