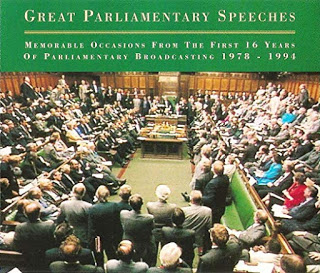 This is a collection of memorable speeches and witticisms from the first sixteen years of parliamentary broadcasting in Britain. Famous parliamentary occasions included range from the fall of the last Labour government, the debates on the Falklands war and the downfall of Mrs Thatcher, and examples of the caustic wit of Healey, Skinner. Heseltine et al are also provided.

As well as this, the usual ramblers make an appearance: Ron Brown, Ian Paisley, Nicholas Fairbairn, David Evans, making up the numbers with their glorious parades of idiocy. The producers of this CD/Cassette can be commended for including them on the grounds that no record of parliament and its proceedings would be anything like a true one if it omitted the brainless barkings of goons such as these.

Other performances from more substantial figures demonstrate how wasted their talents have been in the pursuit of ignoble causes. Michael Foot’s majestic piss-take of a “bewildered” Sir Keith Joseph is worth the money on its own—but listen to his fawning support for Thatcher during the Falklands war and things soon come back into perspective.

Overall, it’s an interesting enough record of the great and the good parliamentary shenanigans since 1978, but if you are going to buy it may be wise to get in on cassette—the nature of parliamentary broadcasting means that the sound quality doesn’t really justify spending an extra fiver buying it on CD. and ten pounds is pricey enough when you consider that they are only politicians, and as such, rarely have anything really sensible to say.