A new party advocating world socialism was founded in Calcutta at the beginning of March when a previously existing organisation, the Marxist International Correspondence Circle, publishers of the Bengali-language Lal Pataka, adopted the principles of the World Socialism Movement and changed its name to the World Socialist Party (India).

Two delegates from the Socialist Party of Great Britain were present at this conference. One of them, Richard Donnelly, gives his impressions.

The streets of Calcutta are alive with the harsh throb of poverty and desperation. To visit Calcutta for the first time is to experience the sharp pain of human helplessness in the face of such deprivation.
In Sealdah railway station families sleep on the concourse, counting themselves fortunate not to have to face the relentless onset of the monsoon that has to be endured by the pavement dwellers outside.
I have felt the unforgettable rage of seeing young women suckling their young on the pavements of these filthy streets, where dead dogs lie rotting in the sun and rats scamper in the rubbish heaps in competition with human beings.
It was amidst these awful scenes, where starving children follow you from street to street begging for a few coppers, that I arrived at Bankim Jatterjee Street for the inaugural meeting of the World Socialist Party (India).
There I heard young men speaking of threats of violence, of loss of jobs, hounding of their parents, and their pledge to work for World Socialism. It was the most crushing indictment that I have ever heard of the money-grubbing, self-aggrandisement of all reformist parties.
Truly, to have been in that hall was to be proud that you were part of a movement that said “To hell with reformism, we are dedicated to win this planet for World Socialism.”
Those days, from 1 to 3 March, may not have been “three days that shook the world”, but they have undeniably shaken the writer of these so inadequate words. 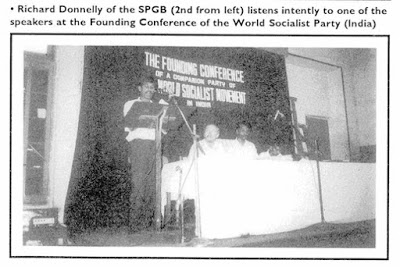