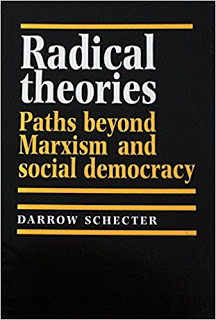 Radical Theories: Paths Beyond Marxism and Social Democracy by Darrow Schecter. (Manchester University Press, 1994.)
Exactly why we should want to follow a path “beyond Marxism” is not altogether clear from this book, and it is to be suspected that the title is the publisher’s and not the author’s. In it, Marxism is often equated with the “state socialism” of the former USSR and its satellites, but here and there are intriguing signs that Schecter thinks there is more to it than this. Unfortunately, he doesn’t proceed too far beyond the signposts.
Schecter writes at one point that the “verdict on Social Democracy is still open”, following up this remark with the comment that “it remains to be seen whether Keynesian techniques will continue to be effective in terms of minimising unemployment and ensuring economic growth”. We would have thought that by now the inefficacy of Keynesian techniques had been demonstrated beyond any shadow of doubt.
Schecter argues that, with the collapse of what he misleadingly insists on calling “state socialism”, the task of socialists today is “to define the contours of a non-authoritarian socialist alternative to capitalism”. In approaching this task, Schecter examines six different strands of anti-authoritarian thinking: anarchism, such as that propounded by Proudhon and Kropotkin; syndicalism, especially that associated with Georges Sorel (who paradoxically also did much to influence Italian fascism); council communism, principally the ideas of Pannekoek; G.D.H. Cole’s guild socialism; market socialism together with the co-operative and self-management movements; and finally green socialism. Schecter concludes that all these strands of thinking have their strengths and weaknesses, though it is clear that his preference is for a form of “Communitarian Anarchism” as the others suffer from problems as to how to regulate and organise production in a non-authoritarian manner.
Given his preference for non-market and decentralised systems of democracy and planning, it is curious that Schecter should have restricted himself to analysis of these six particular theories. Conspicuous by their absence are socialist industrial unionism and another branch of what is sometimes called “impossibilism” – the type of politics advanced by the Socialist Party of Great Britain. Schecter’s book cries out for an analysis of the non-market socialism promoted by so-called “impossibilist” groups together with the rigorous approach to definition and argumentation which this political sector brings.
That his book ignores the contributions to the development of political thought on democratic organisation and socialist production by the Socialist Party’s political sector, with its conceptions of non-authoritarian socialist democracy and planning, is not just our loss – Schecter’s book is all the poorer without it.
Dave Perrin