The Editing Process by Meredith Oakes, The Royal Court Theatre. 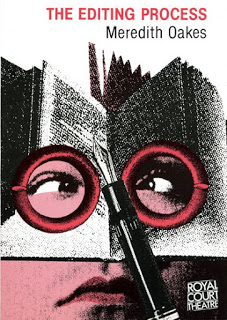 Meredith Oakes’s play The Editing Process is apparently about the take-over of a small magazine by a predatory capitalist entrepreneur. Enter the new owner’s efficiency expert, together with the corporate image consultant, and activities are rationalised, savings (sic) realised, and talk of redundancies is in the air.
Michael Billington in the Guardian complains that the play refuses “to expand into a metaphor for the crisis currently affecting the publishing business”. And Billington is right. There is no acknowledgment of the larger world in which the characters operate.
Oakes is good at showing the importance of work: revealing the impact of work on personality; pointing to its centrality in life, as the basis of most social relations. But, according to Oakes, behaviour has no economic and social reference points. Displays of power and dependency at work are seen as matters of individual choice and not as concomitants of the social relations of work. Indeed in defence of her position Oakes writes in a letter to the Guardian that “whatever system prevails, a power is sought by a few people. The quality of society depends on the moral choices those people make, not the political labels they wear”.
Socialists see this as just plain wrong. Power is not a universal to be forever the basis of struggle and conflict. Power is a feature of an economically-divided society, and its generalised appearance is rooted in economic divisions. Oakes sees power and morality as independent variables: socialists recognise the primary impact of economic divisions in determining the character of ideas in what Marx called “the superstructure of society”.
Within its limitations The Editing Process is a revealing, often very funny, play which us presented with wit and panache. But it is fundamentally flawed. Its characters and their actions are economically and socially adrift. Their behaviours are rooted in personal whims and idiosyncrasies that lack for economic and social underpinning. Like statues without legs Oakes’s characters have separated from the economic foundations which might have more adequately accounted for their actions. The result is a series of undimensional snapshots of a world which properly demands a multi-dimensional focus.
Michael Gill