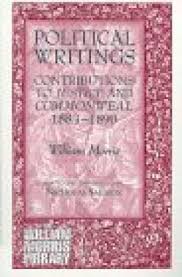 Political Writings: Contributions to Justice and Commonweal 1883-1890. by William Morris (Thoemmes £16.75).
When the Socialist Party was formed, in June 1904, William Morris, arguably the greatest of British socialists, had died only eight years earlier. It is little wonder, then, that the early issues of the Socialist Standard serialised Morris’s political writings; that in the 1940s quotations from Morris appeared on the Socialist Standard covers; and that the Socialist Party decided to publish Morris’s Art Under Plutocracy (under the title Art, Labour and Socialism) with an appreciative introduction. Like Marx himself. Morris is not to be taken up as a political guru, and where he was at odds with our positions we have not failed to say so.
The British Left was slow to take much from Morris, and this was hardly to be surprised at. After all. left-reformism and its statist recipe for social change was entirely at odds with Morris’s revolutionary outlook. Leftists and would-be intellectuals chided Morris with being a utopian poet, an idealistic dreamer and an eccentric marginal force, at best to be remembered for his utopian-socialist novel News From Nowhere, but no more.
When Morris was taken up, largely after the publication of the book about him by the Leninist Page Arnot. followed by the first, highly Leninist edition of the biography of Morris by E. P. Thompson (later to be admirably revised and de-Leninised). there was an attempt to claim him as an embryonic statist and reformist: a misreading of the historical record easy enough for those who have never read Morris’s political writings, but surely dishonest on the part of others.
For many years it was. indeed, difficult to read Morris’s political writings, but A. L. Morton’s edited selection of Morris’s Political Writings (mainly the transcripts of speeches, in fact) was a major step forward. The present writer still regards those writings, read and re-read with enthusiasm, as amongst the simplest prose written originally in English (and not for this journal) to state the case for socialism. Now we are fortunate to have Nicholas Salmon’s paperback collection which includes all of Morris’s main articles. The book is a treat to read (including its useful introduction) and is a landmark in the record of the real revolutionary movement in Britain.
In so many ways Morris could have been writing in this journal. For example, in May 1886 he explains that “in a few words our function is to educate the people by criticising all attempts at so-called reforms”. Again, in June 1888, explaining the principles of the Socialist League. Morris writes:

“The Socialist League has declared over and over again its sense of the futility of Socialists wasting their time in getting . . . palliative measures passed, which, if desirable to be passed as temporarily useful, will be passed much more readily if they do not mix themselves up in the matter, and which are at least intended by our masters to hinder Socialism and not further it. Over and over again it has deprecated Socialists mixing themselves up in political intrigues; and it believes no useful purpose can be served by their running after the votes of those who do not understand the principles of Socialism.”

Morris understood the global nature of capitalism and the folly of trying to establish socialism in one country: “capitalism is international”, he explained in an article against the anti-socialist Bradlaugh in August 1887, and therefore “the foe that threatens it, the system which is put forward to take its place, must be international also”. Most importantly. Morris refused to confuse socialism with state-run capitalism, declaring in May 1890:

“State Socialism? I don’t agree with it; in fact. I think the two words contradict one another, and that it is the business of Socialism to destroy the State and put Free Society in its place.”

Shortly after that the League was taken over by anarchists who assumed foolishly that the state could be destroyed straightaway, rather than as a necessary and immediate consequence of social revolution and the abolition of class rule. Morris then left the League, but continued his efforts (not recorded in this collection) with a good deal of clarity and occasional confusion as to the way ahead.
The purpose of this review is not to claim the bones of William Morris for the Socialist Party. Who knows where Morris might have stood had he lived another decade and been forced to choose between the apparent short-cut to socialism offered by the Labour Party and the uncompromising revolutionism of the SPGB? (After all, Marx’s closest collaborator, Engels, went the way of the reformist ILP rather than the smaller Marxist movement at the end of his life.)
No, Morris’s position must stand on what he might have said and done, but we who live now promoting unadulterated socialist principles have much to learn from Morris’s writings (the style as well as the content) and could obtain few better books in 1994 than this one.
Steve Coleman