Meanwhile in neighbouring Vietnam, the state bureaucracy is also well down 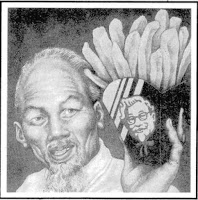 the road to quietly burying the experiment of “Socialism in One Country”. Seventy-five international construction companies arc now bidding for $317 millions-worth of contracts to rebuild Highway One. This road, which links Hanoi in the north with Ho Chi Minh City (ex-Saigon) is a key symbol of the war fought to rid Vietnam forever of American “Imperialism”.

Among the key bidders are US corporations anxious to repair the potholes and craters gouged by their own bombs and mines — and close on their heels the South Koreans, key supporters of the US’s Vietnam war effort. Even the Chinese are having a go, reckoning that this is one area where their technology can compete with the ex-imperialist enemy.

The renewed interest in Vietnam follows its full rehabilitation into the international capitalist system, capped with renewed access to International Monetary Fund and other multilateral agency loans. Naturally there are no humanitarian motives behind this. The flow of international capital into developing economies, set up by the Bretton Woods regime after the last world war, was designed to keep depression at bay in the West by allowing developing countries credit to buy excess production from Western corporations.

In the case of Highway One, international construction companies are now confident that with IMF and World Bank loans pump-priming the Vietnamese economy, traffic volumes will increase sufficiently to yield an acceptable profit from tolls.

And as in China, there are richer pickings to come. The World Bank estimates that Vietnam will need $7 to $10 billion by the year 2000 for infrastructure repair, with at least $2.2 billion allocated to transport.