Raging Hormones, Do They Rule Our Lives? by Gail Vines. Virago, 1993, 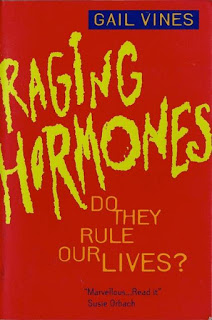 If Gail Vines is right, “the 1990s seem set to witness a resurgence in ’biological’ explanations of human capabilities and frailties”. Her book is a timely attack on a scientific determinism which seemed long dead. Although primarily a feminist critique of the medical profession’s supposed objectivity, her arguments work equally well against all attempts to treat science as a thing unbiased by the perceptions of its time, to “push human agency and the social context of our lives out of the picture”.

Thus, we find that men who are dominated by their hormones are “deviant”, yet for women it is expected. The “feminine” hormone, oestrogen, even takes its name from the Latin for gadfly, “that which causes a frenzy”. Gender roles are socially constructed, so society covered its tracks with the ideology of the hormone, giving an unchangeable basis on which these roles could be justified.

It is an ideology, moreover, well suited to late twentieth century capitalism. The study of hormones betrays a fascination with the uncontrollable within us, a deep psychological anxiety which stems (Vines convincingly argues) from instability in the social and economic spheres.

The Victorian medical profession — male, of course — was obsessed with menstrual bleeding, the fear of obstruction and accumulated waste mirroring the laissez-faire economics of free-marketeers like Herbert Spencer. The fad of today, fatness, symbolises our modern concern with self-control and the “correct” management of desire. Women cope with fears for their role in a consumption-driven society by dieting, men by transposing them on to the unstable “other” woman: woman herself.

The menstrual cycle is seen as defining the essence of womanhood, and its end at the menopause as a loss of allure. Nevertheless, from puberty onwards, girls are conditioned not to let their “private” time encroach on the “public” time of their working environment, whether school, home or workplace. Any conflict between the two is met by attempts to “get the woman regular”.

Many accounts of pre-menstrual tension (PMT) stress the loss of mental and physical discipline, the very things which capitalism demands. Another classic symptom, anger, is usually the cue for therapy. Rarely is it hinted that women have anything to be angry about. Vines questions the hormonal basis of PMT (there seems to be no link between its occurrence and hormone levels), and explains its survival in medical folklore partly through casual sexism, but also through a more easily quantifiable reason: the drugs companies enjoy having such a large market for their “cures”. The causes of stress, too, come less from within than from the inability to control and predict the environment, most noticeably the working environment. Again, capitalism’s problem becomes a women’s problem in particular, because they are urged to conquer stress not just for their own sake, but for others — boyfriends and husbands (in advertisements), and customers and clients at work (contact work, for example in shops, is done most often by women).

Likewise, hormone replacement therapy (HRT) has two faces. Originally introduced to combat the short-term symptoms of the menopause, its pioneer, Robert Wilson, claimed rather more. His 1966 book was entitled Feminine Forever, a ploy followed by modern HRT evangelists such as Teresa Gorman MP, who tells women that “if they want to keep the older man from leaving home for a dolly bird, they too will get smart and use HRT” .

As with PMT, powerful pharmaceutical interests stand to gain from hormone replacement treatments. A mere $1.3m of their money paid for the establishment of the Wilson Foundation in 1963, while by 1991 American women alone bought $730m-worth of oestrogen products every year. Better still, the market is set to expand as the baby boom generation reaches middle age.

Like PMT too, however, the menopause itself is, at least in part, a creation of our society. In Mayan villages, women look forward to it as the end of child-bearing and lack the symptoms found in the West, such as hot flushes. It is only now appearing in Japan, at a time when their gynaecologists’ traditional income from abortions has fallen because of better contraception. In this, the situation is similar to that in the US, the biggest market. In Britain, at least until recently, doctors under the NHS had no need to sell drugs to give them an income, and HRT was consequently much less popular.

Vines maintains that gender and sexuality are the result of upbringing, and no more determined by our hormones than aggression is, or (we might add) greed. There is no “brain sex” which determines, for example, that women have poor spatial awareness, and therefore make bad drivers or bad engineers. In most cultures, boy and girls are treated very differently from their first months, and it is therefore impossible to distinguish biological and cultural factors.

To pretend that people are as they are because of their biological programming, whether by hormones or genes, carries obvious risks of discrimination and worse: it oppresses the individuality of all of us, and takes our sexuality “out of its lived context”. This book is designed to give us a better idea of how hormones, and scientists, work. It is designed to put us back in touch with our bodies. “Such empowerment will come only with the knowledge that in reality, collectively and individually, we are continually creating ourselves.”