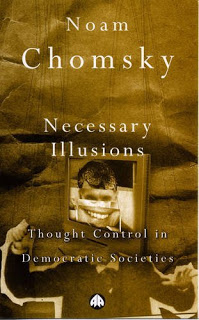 Necessary Illusions: Thought Control in Democratic Societies. By Noam Chomsky. Pluto Press.
Like other socialists, I was impressed by the Channel Four documentary on Noam Chomsky shown last summer. So much so that I bought this book. Its subtitle gives a good idea of its content. In closely-argued detail, Chomsky shows how the media reflects the interests of the capitalist system. Whilst he doesn’t declare himself a socialist his views on the media fit easily with ours.
Chomsky’s examples are taken from the American media but are applicable to Britain (or any other country for that matter). Basically the media reflects the interests of capital despite the media’s self-image of acting on behalf of the people. Whilst the press is often accused of being anti-government or anti-business, this doesn’t hold true on closer inspection. Views about the media range from it being anti-government (or left-wing) to it being independent and representing the public interest. There is no acknowledgement that the media might be pro-government. Anyone who makes this observation and attempts to engage in discussion on it is either ignored or marginalized.
Therefore the thought control is that of portraying the interest of big business as the “national interest”. It doesn’t necessarily favour any particular government, as whoever is in power will act in the interest of capital:

What is at issue is not the honesty of opinions expressed or the integrity of those who seek the facts but rather the choice of topics and highlighting of issues, the range of opinion permitted expression, the unquestioned premises that guide reporting and commentary, and the general framework imposed for the presentation of a certain view of the world.

This “certain view of the world” can be found in the media’s portrayal of, say, the Russian invasion of Afghanistan compared with US aggression in Indo-China or Central America. This agenda-setting helps to influence the population as conflicting views are not allowed air time, or if they are it is “a three minute stretch” in which “it is impossible to present unfamiliar thoughts or surprising conclusions with the argument and evidence required to afford them some credibility”.
In order to achieve true democracy, full informed participation from the people is required but this is dangerous to any government. Chomsky quotes a government study which urged “moderation in democracy”; his definition of this is “the general public must be reduced to its traditional apathy and obedience”.
His views on free speech led to him defending a neo-nazi historian. The excellent point Chomsky makes is that genuine free speech is hearing views you don’t agree with. A review of the Chomsky film by the SWP missed this point but if free speech is just what you agree with then one could say that Hitler and Stalin believed in free speech. This is worth remembering when the Left calls for censorship of the BNP (who would probably welcome such martyrdom).
A short review can’t do justice to Chomsky’s ideas so I would urge readers to explore his books for themselves.
Nigel Green