Between the Lines: A Question of Thought 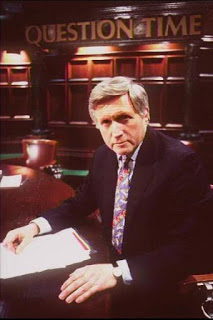 Sissons as host of its flagship current affairs programme Question Time. The job has gone to David Dimbleby, the BBC’s Election Night host and brother of Jonathan, chair of Radio 4’s Any Questions’? There’s nothing like keeping it in the family.
Though Sissons finished his stint on Question Time in a more assured style than when he started, he proved to be a rather tetchy host at times, bringing all the elan one would expect of a dour newsreader. He was certainly different from Sir Robin Day, though not necessarily better. Day himself was a generally rude and bad-tempered chairman who was saved on TV by his many idiosyncracies which made him appear to be more interesting than the politicians, something that shouldn’t have been too difficult. Sissons had little such advantage and tended to blend into the set rather than create his own distinctive style of chairmanship. Dimbleby could go the same way, though his previous experience of the format and his performances on Election Nights suggest he won’t.
The real key — as with Dimbleby’s producers — will be not just how he treats the politicians, but how he interacts with the audience. If the mood took them both Day and Sissons could stop the audience from questioning the politicians and their motives too closely, as some Socialist Party members found out. “Yes, that’s enough of that . . . now to the lady in the blue rinse” was not an uncommon reaction, particularly when dangerous words like capitalism and socialism were mentioned.
Intimidating a TV audience is not difficult for an experienced host, and as Ben Elton would say, it’s not big or clever. Day and Sissons both seemed far too satisfied to be up on the big table with the assorted “statesmen” to be seen to give the underlings much of a say. At times, the audience participation in Question Time has been reduced to the level where members of the public are invited not so much to think for themselves but simply to agree with the pronouncements of the various politicians: yea or nay. Conversely, the best editions of the programme have been those occasions when the studio audience has been able to get on the back of a particular politician and then pepper him or her with focused comments, questions and suggestions that the chair has been powerless to stop.
A Licence to Kill
Sadly, the candidate for the Question Time post who would have proved the most interesting of all didn’t get the job — namely Jeremy Paxman, from BBC2’s Newsnight. Paxman is foremost among the rottweiler school of political interviewing, and his “yes, but isn’t that just complete bollocks” line of questioning has brought him a certain degree of admiration from those who consider themselves “anti-system” and a fair amount of disdain from those who are very much a part of it. With Paxman, politicians get away with relatively little. The big question mark would be over whether he could restrain his aggressive style with an audience. Paxman can sometimes resort to sneering, and that would be no use at all on a programme like Question Time. Indeed, it has been noticeable that when Newsnight has involved an audience panel the laid-back Francine Stock or Peter Snow usually make a better job of it than Paxman. who seems less effective when unable to directly bait politicians.
For whatever reason, viewers of Question Time are stuck with Dimbleby, but never fear, socialists can point him in the right direction. For one thing that would definitely improve the programme would be the actual presence of socialists. Given the BBC’s past record, a socialist member of the panel might be too much to hope for (though we note that the confusion-mongers of the SWP have had members on more than once). So “Between the Lines” recommends that readers of this column write in to the BBC for tickets to the new series of Question Time so as to make the genuine Socialist case heard on TV. You never know, we might at the same time be able to help turn Question Time from being a forum for posturing and prattle into a Programme for public information.
Dave Perrin