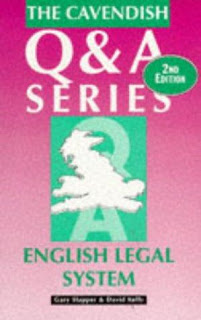 This textbook is intended not just for law students but also for the increasing number of other people who in their work or their daily lives find they need to have some knowledge of the legal system in England. This readable and accessible book will meet that need.

As Socialists we know that the capitalist state has been in a financial crisis for the last twenty or so years and has had to cut back its spending in all departments. What has mainly struck us is how this has affected the various services national and local government provide for the population. This book shows (chapters 12 and 13) that the legal system has been affected too. Not only has legal aid been drastically cut back (“in some categories over 10 million people have been made ineligible by recent changes”), but since 1991 magistrates’ courts, which deal with 97 percent of criminal cases, have been forced to operate in accordance with market principles.

The amount of money they get from central government now depends on the number of cases and the speed they deal with them. As they can attract more funds by dealing with a larger number of minor offences (TV licences and motoring) than a smaller number of more serious ones, it is in their financial interest to pursue the former:

“The clerk is thus under pressure to list more cases of this sort and fewer serious ones resulting from police charges as the latter only generate about £150 income from government funding per case hut take much longer to deal with if there is a not guilty plea and cost the court money.
One justice’s clerk in Hampshire who ’tots up’ the points scored each week from the court’s caseload said in an interview that he had come to speak of cases as ‘earners’ and some cases, like motoring matters, make much better profits than others”(p. 331)

So if you have ever wondered why the police pursue motorists rather than burglars, now you know why: it’s more cost effective. Increased recourse to fines (which bring in money) rather than jail sentences (which cost an awful lot of money) and the increased use of cautions by the police are other aspects of this cost-cutting exercise.

The irony is that all this weakening of “the fight against crime’ is happening under the Tories. But it is a measure of the seriousness of the financial crisis of the capitalist state that those in charge of it have been forced to skimp even on its primary role of maintaining Law and Order.