Between the Lines: Increasing Misery 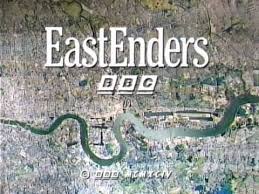 working class grows progressively worse. This is all the more true if one bears BBC1’s EastEnders in mind (Tuesdays and Thursdays, 7.30 pm). For never in the history of television has a TV programme been so dedicated to spreading misery among the working class.
Let there be no doubt about it — EastEnders is a truly horrendous soap opera and anti-working class to its core. At best, its portrayal of working class life is a caricature which bears little relationship to the way workers actually conduct themselves. At worst, its aim appears to be to convince you that life is one long emotional roller-coaster which we are entirely powerless to change. To this end, few characters in EastEnders have any interests other than conducting screaming matches with those they profess to hate, which at any given point in time is roughly half of the rest of the cast. When they are giving their lungs and their fists a break, they play a curious game of treading on eggshells with one another until an unsuspecting actor puts a foot wrong and another extended bout of ranting begins. Some characters, including the psychopathic Grant Mitchell, Pauline Fowler and her son Mark, exhibit mood swings the like of which are rarely seen outside of hospital psychiatric units. Their emotions are seemingly uncontrollable, ebbing and flowing wildly above treacherous depths like storm tides over a beach of quicksand.
Other characters are simply “write-offs” they were apparently born evil and will always stay that way. Their only pleasure in life lies in causing trouble for other people. Such is the lot of “Tricky Dicky”, the market stall manager, and homeless Mandy, whom the other characters treat like Satan’s Daughter, only not as politely. “Tricky Dicky” and Mandy, indeed, are the only remotely stable characters in the series and their stability is one born of calculated malice and an effortless contempt for others which some characters in the series appear to secretly envy.
Happy Half-Hour
In the episode of Thursday 2 December one character — Frank Butcher — smiled, through only at the prospect of someone else’s misfortune, but for this character it was still a definite advance. Ironically, the actor Mike Reid who plays Frank Butcher used to be a comedian of sorts, but really do any of the characters in EastEnders ever have the wit to say something funny. That would be to display signs of intelligence, and the scriptwriters can’t be seen to be having any of that. The characters they create and manipulate have to be humourless and stupid if they are to appear to be convincingly powerless.
Neither can the characters been seen having stable long term relationships with one another. A quick fumble behind the Queen Vic is all that most of them are capable of until the inevitable bitching and recriminations commence. A case in point was Arthur Fowler’s tawdry affair with Mrs Hewitt, so unsophisticated and furtive as to be reminiscent of Howard and Maria from Last of the Summer Wine, only without the humour. Though a bit of sex always spices up a dull script, other soap operas manage without the constant transfers of sexual allegiances that occur in EastEnders, and we can only suspect that it is again a deliberate policy to portray the working class as shallow, feeble and fundamentally untrustworthy.
Nay, Nay and Thrice Nay
The really bad news for the future is that the BBC apparently have plans to increase the dose of this anti-working class nonsense from twice to three times a week. There are reports of unrest among the cast at this prospect, and some prominent cast members like June Brown and Peter Dean have already left the series in disgust at the way things are going. Their view is that the “golden age” of EastEnders is over, but in truth, there was no such cultural nirvana in Albert Square to start with. Even at its peak EastEnders always glorified in portraying the grosser aspects of working class life and unlike other soaps largely shunned humour and pathos. Its leading characters have inevitably been thoroughly unpleasant creatures and its message a hopelessly bleak one. Twice a week has been bad enough, three times a week would be to extend the cycle of misery to breaking point.
Dave Perrin