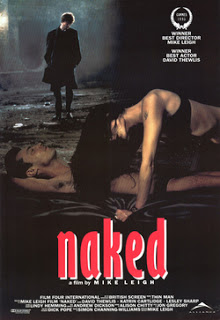 If nothing else Mike Leigh’s latest film provokes thought and discussion. I fell into a long, sometimes heated, discussion on the nature and meaning of this film shortly after viewing it. In short, it depicts the travels of a Mancunian initially fleeing Manchester and looking up an old girlfriend in London and later wandering around London bumping into various unusual characters: two homeless Scottish teenagers, a philosophic and lonely security guard, a fly-posterer, to name but a few. All this is handled with great sardonic wit and Leigh’s usual social realism. It would be fair to say that this is a brutal film, depicting as it does a number of rape scenes, coupled with a sense of universal misogyny and a feeling of alienation gripping all the characters.

But from here my discussion came back to its point of departure. Whilst on the one hand my companion felt that this is the sort of viewing that everybody should watch, the sort of social realism that can be truly educational, the sort of film that can shake people into some vague form of action, I felt rather that the film had no “message.” I saw it as the depiction of a hopeless scenario, one devoid of potential solution. The potential of the romantic ending was ignored, no spectre of a “solution” was apparent.

This is powerful movie-making. It is not the Hollywood variety that insults its audience with fantasy solutions, rather it reflects in things as they are — to a greater or lesser extent devoid of hope. We live in an age of the politically-correct slogan, in an age of “care in the community”, of “charity”, of “Red Nose Days”, of Esther Rantzen TV shows  . . .  the list goes on.

No matter how well intentioned some of those involved in these activities are, the fundamental reality is that they don’t work. Whether one accepts the socialist analysis or not, nothing present social institutions have ever thrown up of has gone far in addressing the problems depicted in the film.

Socialists would have it that it is the system itself that is at fault, and while this is far from being universally accepted, there is no denying the seriousness of the problem around us. For me it is this blank depiction of reality, devoid of hope, that is the only “message” in this film.