The Soul of Man

A few years ago I bought the Complete Works of Oscar Wilde, which included an 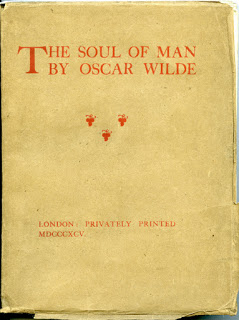 essay entitled “The Soul of Man under socialism“. I was surprised to find that Wilde had political opinions as I was only familiar with Wilde the aesthete but this essay and his poem “The Ballad of Reading Gaol” showed his concern for the poor.

“The Soul of Man” was my first acquaintance with socialism and it was sometime before I became aware of the Socialist Party. At first I thought socialism meant the Labour Party (especially Tony Benn) but obviously now I realize how wrong this view is. Re-reading Wilde’s essay shows that he equated socialism as a world without private property: “It is immoral to use private property in order to alleviate the horrible evils that result from the institutions of private property”. He doesn’t state that socialism is a world without money, but as he so rightly criticizes charily we can assume he meant that the capitalist system should not be reformed only abolished: “Their remedies do not cure the disease; they merely prolong it. Indeed, their remedies are part of the disease”.

Anticipating criticism of this view, he says that “no Authoritarian Socialism will do”, meaning it can’t be forced on people and can only be achieved when the majority want it:

“Socialism, Communism, or whatever, one chooses to call it, by converting private property into public wealth, and substituting co-operation for competition, will restore society to its proper condition of a thoroughly healthy organism, and ensure the material well-being of each member of the community.”

This is as good a definition of socialism as we will find.

It is not just material well-being that socialism can bring but what Wilde calls individualism.

He waffles on about this a bit and about art but basically what he means is that each individual will be able to live fully meaningful and interesting lives. Under capitalism, this is only possible for a minority, in socialism everyone can fulfil their potential:

“One will live. To live is the rarest thing in the world. Most people exist, that is all”.

By “Soul of Man”, I think Wilde meant the personality or “spirit” of humans which can be developed fully without the constraints of capitalist society. With the ending of war, hunger, poverty etc we can take for granted the material things of this world and concentrate on “not in what man has but in what man is”.

Wilde sees machinery as vitally important for this type of society as it can do most, if not all, of the work, “At present machinery competes against man. Under proper conditions machinery will serve man”. Wilde predicts that as machines will do the work this will leave man to enjoy:

Whilst a socialist world may still require plenty of useful work to be done, it is true that machinery can help humanity. Instead of studying new ways for us to kill each other, scientists can concentrate on developing things which would improve the quality of life for everyone. He sums up this view’ with: “The state is to make what is useful. The individual is to make what is beautiful”.

Defining the State
He defines the state as “an association that will organize labour and be the voluntary manufacturer and distributor of necessary commodities”. To use the word state was a mistake as he didn’t mean state as in government: “the state is not to govern”; therefore his “state” means humanity cooperating to provide what we need.

Despite certain reservations, this is still as a good an introduction to socialism, and is obviously still relevant today:

“They try to solve the problem of poverty, for instance, by keeping the poor alive; or, in the case of a very advanced school, by amusing the poor. But this is not the solution; it is an aggravation of the difficulty. The proper aim is to try and reconstruct society on such a basis that poverty will be impossible.”