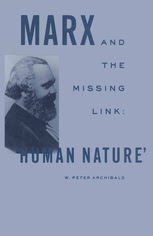 This is another “What Marx really meant” book, although at least the author is pro-Marx. Archibald is a sociologist who aims to make us think about Marx’s conception of human nature. Those who find Marx difficult to read won’t find this book much easier unless they are at home with sociological jargon such as “social formations” and “structuration”. But, as one reviewer says, the author is sane and reliable and his scholarship is industrious.
Archibald is concerned to show that, in Marx’s theory, the individual is just as important as society. Individuals experience needs and wants, deprivation and frustration within an intergroup context rather than an individual vacuum. But that does not make us any less people whose psyches must still be analysed if we are to understand what we think and do collectively as well as individually (the author wrote them and they but surely we are all in this thing together).
He also discusses Marx’s theory which sees human nature “as modified in each historical epoch, the epochs considered are “communal” (the Asiatic, Classical Antiquity and the Germanic), “personalized exploitation” (feudalism, the guild system) and “impersonal exploitation” (capitalism), this is a useful division and one familiar to socialists. More contentious is Archibald’s section on “the communist mode” in which he talks about communist society in the present tense. A later statement questioning “whether the Soviet Union and other such socialist societies can be accurately and fruitfully be regards as ‘state capitalist’” suggests that Archibald is, to put it kindly. out of date as well as wrong.
Stan Parker