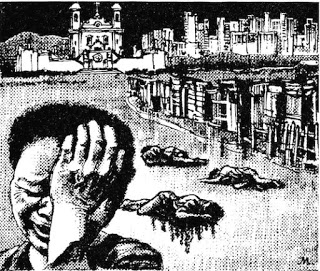 near Canderlaria Church in the heart of Rio de Janeiro’s financial district. The attack left seven dead and many wounded and was the latest stage in what has become known as Brazil’s “war on children”. Human rights organizations estimate that there have been an average of two killings a day this year (Independent, 27 July). The latest killings horrified many Brazilians who until recently showed little sympathy for those children forced to beg and steal in order to survive. Few were surprised when a survivor of the attack identified three local policemen as participants in the massacre.

Renewed publicity about the plight of Brazil’s street children shows that despite the outrage and concern voiced by many in recent years the problem will not go away until its root causes are understood and then removed. It is working-class poverty caused by the property relationships within capitalism which drives young Brazilian workers onto the streets, and reduces their lives to a desperate scramble for scraps of food and a little cash.

The problems are particularly acute in Brazil as it is one of the world’s most unequal nations. The urban poverty seen today was created by the rapid industrialization and urbanization of the country during the last forty years. This crash programme of urbanization reached its peak during the twenty-one year military dictatorship from 1964 to 1985. The programme turned Brazil into a country of migrants as working-class and peasant families were uprooted in search of wage-labour, land, health or survival. Many were driven from their land by land-grabbers, cattle-ranchers, hydro-electric power projects, drought or environmental devastation. Brazil now has one of the most extreme concentrations of land ownership in the world, and the powerful landowner lobby has always managed to further its interests through the Brasilia government. A group of architects in Sao Paulo produced a report in which they astutely noted that:

“the military wanted people to move to the cities where they were more easy to control and could provide the cheap labour needed for the Generals’ industrialisation programme. The network of cities reflects the military government urban project. Its key concept is national integration to complete the occupation and unification of the country as a capitalist urban-industrial territory.”

Most of those who flocked to the cities made their homes in the burgeoning favelas (shanty-towns). They merely swapped rural poverty for its urban equivalent. Thirty years ago Carolina Maria de Jesus wrote a book titled Beyond All Pity (published in the UK by Earthscan, 1990) describing daily life in a favela:

“More new people arrived in the favela. They are shabby and walk bent over with their eyes to the ground as if doing penance for their misfortune of living in an ugly place. A place where you can’t plant one flower to breathe its perfume . . . the only perfume that comes from the favela is from rotting mud, excrement and whisky”.

Today seventy five percent of Brazil’s 150 million population live in cities and there are twenty cities with more than one million inhabitants. It is a commonplace to say these cities sprawl unplanned. The architects from Sao Paulo disagree:

“Far from representing the absence planning the periphery model (of favelas) corresponds to a strategy of maximum capitalist accumulation. It enables the settlement of large contingents of people in areas that are bare of everything, reducing to a minimum the need for investment in housing and infrastructure either by the public or the private sector.”

Poverty has worsened for Brazil’s working class in recent years as a rigid austerity programme imposed by the government, coupled with recession, has lead to drastic cuts in public spending, wage-cuts and redundancies. Things aren’t so bad for the capitalist class as the concentration of wealth has increased. The richest 10 percent own over half the national wealth, whilst the poorest 10 percent own less than one percent. An official survey in 1988 showed that 54 percent of Brazilian children and adolescents live in families earning less than US S35 per month. The lack of work and the social pressures of poverty such as overcrowding, domestic violence etc have forced literally millions of children onto the streets.

It has been estimated that there are approximately seven to eight million street children in Brazil (Brazil: War on Children, 1991) though of these only a minority have no contact with their families. For those abandoned or orphaned, home is often a park bench, a shop doorway, a scrap of wasteland or a damp tunnel. Huddled in groups for safety their first priority is survival — finding food. They scavenge city waste dumps, shine shoes, mind parked cars or sell lottery tickets. Others steal from shops, mug tourists, commit burglaries in desperate efforts to make ends meet. A young boy interviewed by World In Action said “we steal watches, necklaces. We don’t have anything to eat. We don’t have anywhere to sleep — that’s why we steal”.

Facing discrimination and outright hostility from much of society many street children turn to drugs in a bid to escape the nightmare that is their life on the streets. A survey of street children in Sao Paulo showed that out of 119 children aged between 6 and 17, 45 percent were classified as “heavy drug users” using up to three different drugs a day. Glue-sniffing is the most popular. A young prostitute in Salvador said, “I sniffed a lot yesterday and then I dreamt of a school where we could learn ballet, the capoeira dance, reading and writing. School is the best thing in the world. I’m always dreaming about it”. Sadly she has little chance of such schooling in a country where most of the education budget is directed towards the universities where the students come from high-income families.

Many children work in gangs managed by modern-day Fagins who appropriate a share of the childrens’ spoils. Some offer the kids the only support and affection they receive. However, more usual are regular beatings and even murder if the children aren’t “productive” enough. The police too like to take a share in any money gained from muggings and often demand objects such as stolen watches.

Child prostitution is widespread and growing. A Brazilian Congressional Inquiry recently reported that there are about half-a-million child prostitutes in Brazil — more than in any other country except Thailand. According to Dulce Acioli from the Movement for the Promotion of Women, girls as young as seven and eight are working as prostitutes in Belem. Many other girls vanish without trace. Every month about 150 girls are registered as missing with the authorities in Rio Branco alone. It is believed that many of these girls end up working as prostitutes in mining areas (Guardian, 29 June).

The public response to the explosion in the numbers of street children has at times been savage and brutal. As Jan Rocha says in the introduction to Gilberto Dimenstein’s book Brazil: War on Children:

“Brazilians are warm and hospitable and they love children, but most of them do not see street children as children. What they see in these ragged, dirty kids, drugged or lively, happy or sad, is a threat. A threat to their property, a threat to their lives. That is why a few years ago in the centre of Sao Paulo a lawyer savagely kicked and stamped a thirteen year old boy called Jesus to death when he grabbed a woman’s gold necklace, a crowd stood round watching and egging him on. Only two young office girls protested at the brutal act.”

The general feeling of economic insecurity among the population creates the perfect environment for the growth of groups claiming to dispense justice. For many years death squads have waged a silent war of extermination on the backstreets against petty criminals. Many death-squads are made up exclusively of police officers, such as the one implicated in the recent Rio de Janeiro atrocity. Others consist of hired gunmen paid for by local businessmen and shopkeepers. Sadistic torture is often a precursor to a bullet in the head. Bodies are often found with genitals severed, eyes poked out, burnt with cigarettes and slashed by knives. Many death-squad members have enjoyed considerable public support. Ivanildo Freitas one of the most famous “justiceiros” (avengers) is believed to have murdered seventy-two people. Following his arrest in 1984 people demonstrated on his behalf in the centre of Sao Paulo. Freitas said from prison: “An exterminator is not a criminal. A criminal rapes, steals, and even kills his own father. I think I am a kind of Representative of the people.” Another “justiceiro” known as Esquerdinha even ran as a candidate for the Christian Democrat Party in local council elections saying: “I think it is my duty to help the community by providing greater security to a people who have been trodden on by these criminals” (Brazil: War on Children, 1991).

Thankfully recent events seem to show greater tolerance and more understanding of the plight of the street children. July’s shooting in Rio horrified many Brazilians and hundreds of protesters rallied in support of the murdered seven children (Independent, 28 July).

This silent war against Brazil’s street children has left its psychological mark on the children too. Many expect to die violent deaths before they reach adulthood. A thirteen-year-old street girl from Recife said: “It is our destiny. Nothing can change this. We are on the street. We arc already dead.” One boy, known as Rusty, tragically prophesied his own fate: “My life is like the wind. Nothing can stop it blowing away.” (Brazil: War on Children).

There are few opportunities to escape the poverty, homelessness, violence and drug-abuse of the streets. A few charities run hostels which offer temporary sanctuary to a few children, but they can do nothing to change the economic forces which push young people onto the streets in the first place.

Socialists welcome the recent protesters of Rio who marched with banners proclaiming “street kids are our kids” and hope that no more will some of capitalism’s most desperate victims be scapegoated as the cause of the problems obvious to all. Capitalism will, however, continue to force new generations of children onto the streets until such a time as we take the appropriate political action to abolish it.