The Old Bill and the new Tony 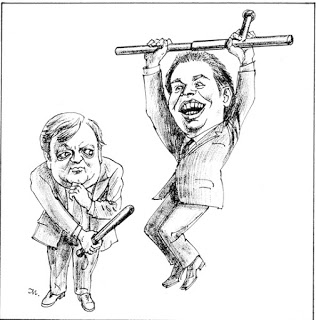 One of the traditions of British politics is that the Tories are in favour with the police, the prison officers and all aspiring hangers and dispensers of corporal punishment because they believe they take a strong line on Law and Order. Another tradition is that the Labour Party are not popular in those same quarters because they are soft on crime and criminals, in accordance with some theory that we live in a class-divided society and the penal system is there to protect the interest of the ruling class and keep the working class in their place.

So how do we explain the fact that Kenneth Clarke, in one of his last public appearances as a Conservative Home Secretary, was so frostily received by the Police Federation conference in May while on the following day his Labour shadow, Tony Blair, was rapturously applauded? Blairs speech was described by the Federation chairman as “superb”; one of the Federation officers thought he had come close to the ultimate achievement of a standing ovation. In contrast, Clarke was described by one policeman as “an arrogant, rude Tory snob”. Since arrogant and rude is how many people experience police behaviour we can infer that Clarke had dared to disagree with the delegates.

It was not through any penetrating analysis of the causes of crime and the role of the police in capitalism that Blair won his applause. What he did was to reassure the nation’s finest that a Labour government would be tough on crime and would give the police, who are feeling a trifle beleaguered at the present time, a lot of what they have been asking for but did not look like getting from Clarke. On one issue. Clarke seemed to be bent on making it easier to support allegations of misconduct by the police. Now this is a matter of—how shall we put it?—some delicacy, as hardly a week goes by without some fresh revelation about innocent people being stitched up by the police and clapped behind bars as a result—sometimes for very long periods.

As a barrister Blair might have been expected to recognize that, even by the corrupt and decadent standards of capitalism, something is seriously wrong with the police. After all, it is not beyond imagining that a shadow minister might one day find himself on the receiving end of planted incriminating evidence or apparently signing a confession to some heinous crime they haven’t committed. But no: he assured the massed ranks of the Federation that he is not in favour of tampering with the present set-up. Before they began clapping, the police heaved a huge sigh of relief.

Then there was the matter of crime—or rather that bit of it which finds its way into police records. Year by year it goes up and up, no matter how many more police there are or how many new laws or how much harsher the penalties. Blair had to tread a wary path here—after all it is a Labour Home Secretary that he hopes to be and he has to think about his reception at the next party conference where some of the delegates may have felt police truncheons on their heads on the picket line or on a demonstration. So while he makes a passing acknowledgement that the extremes of poverty, unemployment and poor housing have their effect on crime—which even the police have recently come to accept—he modified this:

no one but a fool would excuse the commission of a crime on the grounds of the individuals upbringing.

And then, criticizing the current disarray in what is known as the criminal justice system he gave an implied promise which would not have come amiss from Thatcher herself:

It cannot be the right way to start by imposing a freeze on (police) recruitment.

No wonder they cheered him. And in case there were any lingering doubts about whether the Old Bill really do love the New Tony, Blair said he supported testing the side-handled batons as seen on TV when the Los Angeles police were shown beating up Rodney King—tests which Clarke had refused.

There is a simple answer to the question why the police should be so much keener on this prospective Labour Home Secretary than they were on the Tory who held that office. Blair has made no secret of his view that the Labour Party must be ready to make whatever changes or abandonments to its policies which are necessary to win power. He knows—he would be insensitive to his audiences in a way for which barristers are not famous—how strong are the prejudices which arise from that tradition about Tory strength and Labour weakness on Law and Order. So he makes adjustments. This twisting may infuriate some members of the Labour Party. If so, it is time they faced the fact that they support a party which stands for capitalism and that winning power to run this society does not come from holding to principles.

They might also learn that there is no evidence to support that prejudice about Labour being soft on crime. For example, the “short, sharp shock” (which really meant mindless brutality and repression) was to be applied in the detention centres that were the brainchild of the 1945 Attlee government. Labour was in power when the Metropolitan Police—for which the police authority is the Home Office—introduced the notorious, rampaging Special Patrol groups. A similar development in the prison service, again under a Labour government, was the MUFTI squads, which quickly established a reputation for fearsomely dealing with recalcitrant prisoners. One of the achievements of the ever- so-cultured-and-liberal Roy Jenkins as a Labour Home Secretary was the Prevention of Terrorism Act, which did not prevent terrorism but which did restrict many of the safeguards of the rights of people under arrest by the police. What it amounts to is that no Labour Home Secretary has ever shirked doing whatever capitalism has demanded of them.

That, after all. is the function of all the organs of government among which the Home Office is of first importance. The name, so comforting, is misleading because the Home Office is responsible for a massive coercive machine—the Law, police, prisons, control of “aliens” and the like. In its wilder moments it might see itself as the guardian of public morality and safety even if it is difficult to see people like Kenneth Clarke in that role. Anyone—like Clarke who gets the job of Home Secretary is supposed to be very close to becoming Prime Minster, except that there are plenty of examples of ambitious politicians—Rab Butler. Roy Jenkins. Leon Brittan are just a few—for whom the job was close to their political grave.

But, no doubt, Blair takes a more optimistic view of his chances. There is no lack of media encouragement to him to do so. Christened Anthony Charles Lynton Blair he decided—like Anthony Wedgwood Benn—that plain Tony was a name much more voter-friendly. He rose through choir school, Fettes College and Oxford to became a barrister in 1976. He got into Parliament for Sedgefield in 1983, when Michael Foot was laying waste to Labour’s dreams of ousting the Thatcher government. His clubs—a nice thoughtful touch this—are not Brooks or Whites or the Athenaeum but Trimdon Colliery and Deaf Hill Working Men’s and Fishburn Working Men’s.

Blair burst onto the political scene as a bright-eyed, irrepressible young debunk specialist on TV. Perhaps his boyish looks were considered too youthful to reassure the voters because recently Blairs manner has been more subdued and weighty, as would be expected from someone who wants to be minister in charge of arresting workers who break the law, locking up tens of thousands of them and keeping the numbers of immigrants at a level acceptable to the prejudices of the voters. That is why Blair has come up with that statement which although suffering from an in-built inconsistency is crafted to appease both sides of the argument about crime—he wants to be tough on crime and tough on its causes.

Blair would not be the first politician to evade his party’s policies while appearing to implement them. That is how he won the approval of the police and how he hopes to win the approval of the Labour Party, who will doubtless give it to him if they see that he attracts the votes. And then all he has to worry about is winning the approval of the voters, who remain vulnerable to so many kinds of trickery and deceit. Then this one-time choirboy can sing in the bath at Number Ten.