Want to know how to pass the GCSE Economics exam? Then this is what you 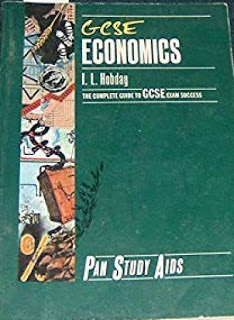 must do. Ignore the facts, blinker your mind and repeat the following parrot-fashion: all resources are scarce and always will be; human wants are unlimited and so can never be satisfied; without a class of entrepreneurs nothing can be produced.

In case you think we might be exaggerating, have a look at any course textbook. Here, for instance, is what I. L. Hobday lays down in the first lesson of his GCSE Economics in the Pan series “The Complete Guide to GCSE Exam Success“:

Unlimited consumer wants are greater than the quantity of factors of production (land, labour, capital and enterprise) available to produce goods and services.

Consumer wants are unlimited. This means that consumers (i.e. anybody who buys or purchases) want food, shelter, clothes, etc. These wants are unending. For instance a consumer may want food, then more food and better food. Goods and services cannot, however, be produced in unending amounts because the factors of production (or resources) are themselves limited in supply. Therefore goods and services are scarce (which means limited in supply).

Whatever you do, don’t let common sense interfere at this point and make you challenge the unsupported claim that “consumer wants are unlimited”. Unlimited? This would mean that each and every one of us wants to consume the whole universe, a proposition that would be well-placed to win a prize in any competition for absurd statements.

The truth is, of course, that human wants are not “unlimited”. “unending” or “insatiable”. In practice what we want is relatively limited and quite reasonable. We want decent food, clothes, housing, household goods, travel facilities, health care and entertainment. What most people want is no doubt greater than what we are allowed to consume today as a result of the restrictions imposed by the size of our wage packets or salary cheques, but this is not at all the same as saying that our wants are unlimited.

All the studies that have been done regarding people’s food needs have shown that resources are more than enough to meet them. And the same result can be expected to be reached if studies were done about the amount of clothes, housing, etc that people wanted. In any event, it is not good enough to lay down as a dogma—as the GCSE course does—that resources aren’t sufficient for this. Facts to back up such a claim ought to be produced, but none of the economics textbooks ever do this.

And don’t challenge either the peculiar definition of “scarcity” as meaning what is “limited in supply”. Most of the resources needed to satisfy our wants, except perhaps the air we breathe and the rays of the sun, are limited in supply in an absolute sense, but that’s not the same as saying that they are “scarce”, i.e. in short supply.

Just the opposite is the case. In relation to people’s actual reasonable and limited wants, most resources are not in short supply, but are or could soon be made available in adequate quantities, in fact in more than adequate quantities. But. if you want to pass your GCSE Economics, you mustn’t mention this.

Pan Books’ “Complete Guide to GCSE Exam Success” also tells you want to write about the “factors of production”. Basically—we’re talking about the real situation now. not what you have to repeat to pass—for production to take place two “factors” are necessary: materials that originally came from Nature (“Land”) and the mental and physical energies and skills of human beings (“Labour”). The combination of these two is the source of all existing (and past) wealth. It is legitimate to distinguish a third “factor”—human-made instruments of production, which conventional Economics persists in calling, misleadingly, “Capital”—but only as long as it is recognised that this is derived, and can only be derived, from a combination of the first two.

But to pass your GCSE Economics you have to agree to the invention of a fourth “factor” called “Entreprise”. This, you must assert, is the key factor without which the others are useless. You must copy Hobday and write:

Without the entrepreneur the other resources have no economic importance—they need to be brought together and organized for production.

If you refuse to sing this hymn of praise to the captains of industry and business men and women, then you can say goodbye to passing your GCSE exam. The last thing you must do is to ask whether, perhaps. Labour (which Hobday admits to be “the mental and physical human effort involved in the production process”) could not organise production on its own, without the entrepreneur.

Because if you did, you might come up with the common sense answer that, even today under the profit system, the actual work of production, from start to finish and from top to bottom, is carried out by workers applying their mental and physical energies to materials that originally came from Nature (either directly or as instruments of production fashioned from Nature by earlier generations of workers). All an entrepreneur does is look out for opportunities to make a profit and line their own pockets out of the wealth produced by Labour.
So, if you need to pass the GCSE Economics exam to have a chance of getting a better job. our advice is: write down the crap the examiners want to read—but don’t believe a word of it.