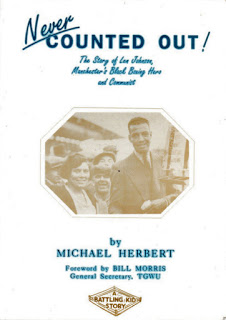 This book recounts the boxing career and political activity of Len Johnson, one of the best middleweights of the 1920s. Despite meeting, and sometimes beating, some of the best boxers in the world Johnson was not allowed to compete for British or Commonwealth titles because of an official ban on “coloured” boxers.

As Herbert points out:

The need to maintain the myth of European superiority in social as well as political life becomes apparent. A contest between black and white in the boxing ring could too easily become a metaphor for the stability of the Empire should white boxers be regularly defeated.

As part of the small black community which had settled in Manchester after the opening of the Ship Canal in 1894, Johnson, born of an African father and an Irish Mancunian mother in 1902, faced hardship and racial discrimination.

He experienced boxing at its toughest—training in the back yard with a skipping rope made from a piece of clothesline—and earning only £1 from his first professional fight.

In a professional career which spanned twelve years— from 1921 to 1933—Johnson had 127 contests, of which he won 92. lost 29 and drew 6. But despite his prowess in the ring he was only able to make a living wage from the sport and financial difficulties forced him to make a come-back in 1931 despite suffering from rheumatism in both elbows.

Towards the end of the second world war Johnson joined the Communist Party and this marked the start of his political activity. He was a founder member and secretary of the New International Society which was formed in Moss Side, Manchester in 1946. The society’s fight against racial segregation abroad and discrimination at home soon led to the Communist Party trying to control it. A policy document dated 2 December 1948 states:

Apart from the Society, there is no effective means of winning the support or neutralising colonial individuals or groups which, for a variety of reasons, do not join the Party.

In the 1950s, Johnson campaigned energetically on behalf of the singer Paul Robeson who had had his passport withdrawn for Communist activities in the USA. He also stood as a Communist Party candidate in Manchester local elections on six occasions, his small vote dwindling each time as Cold War conditions hardened.

In 1962 Johnson seems to have dropped out of political activity completely, possibly due to ill health because he remained a Communist Party member until his death in 1974.

This account of the machinations of the Communist Party in trying to manipulate and control groups which could serve its interests, combined with meticulous research to discover the boxing career of one of the sports forgotten heroes makes fascinating reading, but it needs to be stated that it is the barbarity of capitalism’s economic system which forces workers to risk injury to earn a living. It was also a complete waste of Johnson’s considerable abilities and energy to campaign for a politically dishonest organization such as the Communist Party and its now discredited state-capitalist policies.