One aspect of the market system is the selling of their mental and physical energies by members of the working class to “earn a living”. We use the term “working class” in its widest sense: all those men. women and children who depend for their livelihood on selling their ability to work to an employer, dependants of those earners, the self-employed, those seeking an employer or who have had one (or more) and are now living on a pension. In other words, about 98 percent of the population. The other 2 percent own sufficient of the means of wealth production and distribution to enable them to live on profits, rents or interest on capital.

The labour, or more accurately the labour power, of workers—whether skilled or unskilled, experienced or inexperienced, poorly paid or relatively highly paid—is bought and sold in a market. But it is not like a supermarket or a car market or a housing market, where things change hands for money. In the labour market people are bought and sold. Not, of course, quite like slaves. The capitalist system is more subtle than that. It is the working capacities of people that are bought and sold, usually by periods of time, less often by piece-work or the amount of goods produced or finished.

How fair are the terms of the transaction? Is it a case (as most economists would have us believe) of a willing buyer meeting a willing seller at a mutually acceptable price? Hardly. Capitalists, in their role as as employers, dictate the price at which they will buy labour power and even whether they will buy it at all. They have to make a profit from the use of that labour if they are to stay in business. So they compete with each other, not to bid up the price of labour power—though this does sometimes happen when particular types of labour are scarce—but to make the greatest profit from using it.

Trade unions help to prevent the price of labour power falling. Non-unionists may be exploited more easily by employers happy to pay the lowest wages acceptable to workers often desperate for employment. Such employers have recently been helped by the governments decision to abolish the Wages Councils, which set minimum wages for 2.5 million low-paid workers, 80 percent of whom are women.

The recession verging on slump means that unemployment is rising. Currently the official unemployment rate is just over 10 percent, with the true rate—counting all people who would like paid work— much higher. In Britain as a whole there are now 25 people chasing every job vacancy and in London the figure has risen to 56 (Evening Standard. 4 November).

Job training has a rapidly growing partner: job-seeking training. There are books, talks and classes on how best to present yourself at a job interview, how to write a CV, how to become one of the lucky one-in-25—or 56.

Special problems face those who seek to earn a living selling goods or services. Money is tight and sales resistance high. Only supcrsalespcrsons make decent money. One supersalesman hired the Wembley Conference Centre to bring his message of super- salesmanship to a keenly competitive, if not desperate audience. Part of his act was to carry a skull under his arm, raising its hinged head to display a chocolate-bar-sized product inside. “It gets peoples attention”, he claimed enthusiastically. Interviewed briefly on television news, a couple of the punters said why they paid to see such nonsense: they wanted to get one jump ahead of their competitors, they were prepared to learn new and degrading tricks to earn what must mostly be a precarious living. 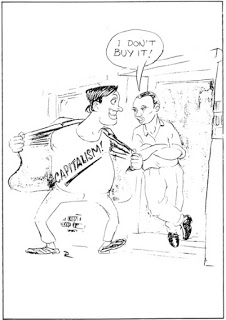 Gavin Kennedy, in his book Superdeal, writes about how sellers are forced to be leaner and meaner if they are to survive. “The hungrier (the sellers) are, the faster they spend their money, preferably while in abject debt, the better they are at reaching their sales targets”. Psychological studies are mined for the help they can give to this process of exploitation. “All good sellers know that one of the most powerful selling closes is to play on the ego, or conscience, of the buyer. They shame you into a ‘buy’ decision”.

Fictional literature, which so often reflects real life, dramatizes selling. Willie Loman, in Arthur Miller’s Death of a Salesman, epitomizes an ageing pawn in the capitalist game. Desperate to be liked by his potential customers, he is enjoined to “never fight fair with a stranger in the jungle”. In the play Glengarry Glen Ross (now also a film) salesmen in a Chicago real estate office vie with each other to sell overpriced land in faraway Arizona, knowing that all but the two most successful of them will lose their jobs at the end of the week.

Buying and selling is the essence of the free-market capitalist system. That system has proved to be more efficient at producing wealth than the state bureaucratic or centrally-planned capitalist system. But at what human cost? It is sometimes claimed that workers’ co-operatives are the answer. But unfortunately these, too, have to work within the capitalist system. In the absence of socialist understanding, they are eventually overwhelmed by that system. The only way to end the exploitation and human degradation inherent in capitalism is to develop socialist ideas of production solely for use, so that corresponding practices may follow. Then buying and selling will be relegated to the status of a game of monopoly, amusing but nothing to do with maintaining a decent life.