Between the Lines: House of Frauds 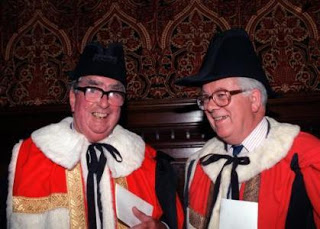 British ruling class. All that left-wing talk about how the rulers will prevent a socialist majority from having our way has never carried any credibility. Watching tire Channel Four Cutting Edge documentary on the inside life – life? – of the House of Lords (16 November, 9 pm) was watertight evidence that sanity is no qualification for being in the ruling elite of capitalism.

The rituals of the so-called Upper House, where twelve hundred unelected members can claim five hundred pounds a week for doing a totally worthless job which involves a lot of sleeping, are part of that public school tradition which makes Britain an ex-Empire. The documentary showed the induction into the peerage of two new life frauds. Geoffrey Howe — Thatcher’s hatchet man at the Treasury who finally turned the axe on the mad priestess herself — and Denis Healey — who started out in the Communist Party and ended up as the Labour Chancellor who introduced monetarist policies before the Thatcherites ever entered Number Ten.

These social vandals were receiving their pay-off for a lifetime’s dirty work of screwing the working class on behalf of the bosses. That is why life peerages are given to politicians and trade union leaders who have served the system well. Most members of the House get there simply because their old man died and they inherited a peerage. Remarkably, the documentary stated that one third of all members of the House of Lords went to just one school: Eton, the place which has huge annual fees and where names of pupils must be signed up soon after they are born. So much for the myth of equal opportunities under capitalism.

But back to the silliness. Watching the absurd rehearsal of their inauguration, where Howe and Healey had to practise putting on and taking off their ridiculous medieval hats and bowing to the Lord Chancellor as they proceed towards him, it became clear that this sort of behaviour would not be out of place in the confines of a psychiatric hospital where disturbed people repeat certain actions with no particular purpose. The parliamentary games are to a great extent about doing barmy things simply because other people have done them before. Those caught up in such a ritual, and benefiting from the payments involved, no doubt think that they are indispensable.

In fact, this documentary was ample proof of the good sense of dispensing with these useless people. Unlike other critics, however, socialists are not simply out to abolish the House of Lords. We want to abolish the entire function of government. This will only happen when lire majority refuses to be governed, to live as inferiors in a class society, and to demean themselves by accepting for one moment that there are superior people who must sit in a special House or Chamber and make decisions for us.

More Frauds — No Longer In The House
Socialism will be a stateless society without leaders or led. The Cutting Edge

documentary the week before the Lords’ expose was about the Militant Tendency — in particular, their campaign in Broadgreen in Liverpool to retain their MP, Terry Fields, in the 1992 General Election. As it happens, the Militant members shown on this documentary were exposed as sincere and enthusiastic people whose convictions were worthier, at least on the surface, than the tired old official Labourites who were out to defeat them.

The problem with Militant is that they are a fraudulent body, they pretend to be socialists, but they stand for state capitalism — a repeat of Lenin’s failed vanguardist strategy. They claim to be the real Labour Party, even though Labour has expelled them and is embarrassed by them. Terry Fields appealed for support on the grounds that he was the real Labour candidate. His supporters sought votes on the basis of sterile old promises to make capitalism better. Fields lost the election. Of course, he lost in part because he was the victim of a campaign to discredit his leftist stance. But it would be nice to think that he lost also because workers in Broadgreen were unwilling to get excited about left-wing Labourism, were not prepared to give yet another pseudo-radical five years to govern them from the House of Common Thieves in Westminster, that they regarded Fields and other politicians as playing a game that they wanted no part in.

The Socialist Party is hostile to both ermine-clad rulers who like capitalism as it is and reformist MPs who want capitalism with bandages over its worse sores. Neither Etonians nor Leninists, but THE WORLD FOR THE WORKERS!