The Magic of the Mad-House 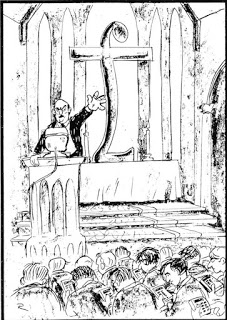 mantra. Buy your own home—start your own business—purchase shares—the market rules, OK. But for millions who listened to the bogus magicians it was not to be OK. It was to be less like magic and more like a trick. Homes repossessed: businesses bankrupt; shares having to be sold to pay the debts. The magic of the market was transformed into the misery of uncontrollable, vicious economic forces which are eating away human lives and ridiculing past aspirations.The lie about the market was not hard to see—if you were not blinded by the prophets of profit. The market was mythologised, turned into a cosy image of friendly producers happily exchanging their wares in the town square. The propaganda of the Eighties tried to make buying sound like some sort of passport to security. They spoke of a “property-owning democracy” and wage slaves were fooled into buying their wafer-thin slice of it. So-called yuppies took huge mortgages, now costing them more than the petty packages of luxury living areas which they had imagined meant success. Unemployed workers were encouraged to borrow in order to set up businesses, the debts of which now mean that for many of them suicide and the receipt of their life insurance pay-outs is the most rational economic option.

In 1992 few speak of the magic of the market. There are the rightwing nutters from the Adam Smith asylum and the Libertarian Alliance—“we demand a free market in drug pushing and a privatised police force”—but these days they have one foot in the Tory research departments and the other in a psychiatrists waiting room.

These days—the days of hopeless disillusion—a new deity has arrived on the scene: The Markets. Switch on the radio and the newsreader will foretell its next divine act. “The Markets are feeling uncertain this morning—The Markets want a cut in interest rates—The Markets are not very pleased with the result of the French referendum—The Markets want more cuts in welfare spending”. It is like a return to Greek drama where huge, invisible entities govern destiny. The day after Major devalued the pound, or, to use the current newspeak, Major allowed the pound to free fall on the Markets, a man on the BBC said that he was uncertain about the future of the British economy, but “it’s all in the lap of the gods now—or rather the Markets” (verbatim quote).

So now we have it: who needs Archbishops and Popes when we have thirty year-old stock market analysts with degrees in economic gobbledegook to tell us our fortunes? The same night as the above comment the BBC TV newsreader declared, in exactly these words, that “Industry would like an interest rate cut of at least another one per cent”. Who is Industry? Is it a man. a beast, a gang, a private club? Who are the Markets when they’re at home?

Of one thing we can be sure: the Markets are not the boys and girls in white shirts and braces who run round the Stock Exchange screaming like they’re on drugs. And Industry is not the men and women who are actually involved in industrial production. The workings of capitalism are not about them. These are the makers and counters of profits.

The truth is that nobody controls the Markets. Nobody can. It is beyond the control even of the few who benefit from production for profit. But those for whose advantage all of this market madness is going on are not the wealth-producing majority. The function of the capitalist market is to sell commodities in order to provide rent, interest and profit for the small minority who monopolise the productive resources of society. It is in their interest that the majority must suffer.

Whingeing marketeers
The spectacle of Tory ministers whingeing in parliament about profit-seeking speculators disrupting the economy is truly funny. Capitalism is all about the freedom to seek profits at anybody’s expense. What do the Tories want the capitalists to do? Lose the chance of making a fast buck so that the government will look good? Just as absurd is the Labour Party’s claim that given power they could tame the market. Why then have they never left office since 1924 without unemployment being higher than when they were elected? A Smith-Brown government would be just as much at the mercy of the market requirement to produce profits as all earlier ones.

Any government which finds itself in power when capitalism is going through one of its endemic crises, with the need to destroy productive forces in order to restore profits, will have no option but to ride the storm. What is particularly just about the cries of seasickness from the present victims of an exceptionally rough storm is that they were the people whose whole appeal rested upon the endless prosperity and stability which they claimed market forces generate. For many workers “market forces” are a code word for misery. The best response to the sadistic whims of the Market-gods is to send packing the market-loving messiahs and abolish the market by bringing the resources of society into common ownership and democratic control.

A marketless society is the only sane alternative to the mad-house which they call The Economy. Tinkering with it will be of no practical use; it would be like buying a new suit for Frankenstein’s monster and hoping that newly-clothed a monster he will no longer be. The urgent task before us is to unite to take society away from those whose sole intent is to sacrifice needs for profits. Then, once society is in the hands of all of us, we can begin having free and equal access to the available wealth of this abundant planet.