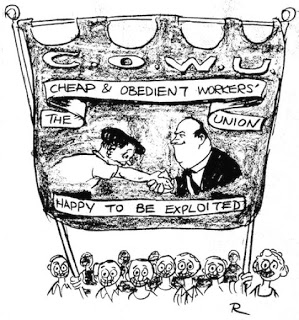 The TUC met in Blackpool in early September amid a continuing decline in trade union membership. Membership reached a peak in 1979 when overall—TUC and non-TUC unions—it stood at 13,446,000, a density of 58 percent of the working population. Membership of unions affiliated to the TUC amounted to 11,731,399 if the electricians, who were expelled in 1988, are excluded. According to the Department of Employment Gazette (April 1992) overall membership of trade unions stood at 9,947,000 in 1990. This meant that the proportion of workers organized in unions had declined to 43.9 percent. TUC membership at the end of 1991 had declined to 7,757,000, a fall of almost 4 million compared with the 1979 figure (Labour Research, August 1992).

To pin hopes of a recovery on the trade union leadership is likely to lead to despair. Ever since the election of the Conservative Party in 1979, union leaders have based most of their hopes on the future election of a Labour government. When this failed in 1983 they bowed their heads in disbelief and sat back for another four years. In 1987 the Labour Party once again failed to gain a mandate to attempt to run the wages system more effectively than the Conservatives. With yet another failure this year, it might have been thought that lessons might have been learnt. Nothing of the sort. Most recently, union leaders concerned themselves with the completely irrelevant business of who would lead the Labour Party, quite possibly into a further, record-breaking, fifth defeat in a row.

What needs to be done is to rebuild trade-union organization from the base. The basis of strong trade unionism is effective local and workplace organization with active rank and file participation and direct election and control over local representatives. It seems clear that in many industries and workplaces this organization needs rebuilding whilst in others it needs establishing for the first time. From this base more effective links would need to be built between workers in different workplaces, companies and industries. Such effective organization cannot be built from the top downwards but needs to be established by workers themselves. Effective trade-union organization has to be based on workers self-organization: a self-organization based on the understanding that the interests of employers as buyers of labour power and workers as the sellers of that commodity are antagonistic.

Quite clearly a leadership with strong links with a party which aims at running capitalism and which all too often puts forward the view that the interests of employees and employers are identical cannot be relied upon to build industrial organisations based on working-class interests. This policy of class collaboration reached its disgusting height at this year’s TUC when the Director-General of the Confederation of British Industry was invited to address the delegates. The CBI Director-General certainly had a better notion of the interests of his class than most union leaders, calling as he did for lower wage increases.

As usual with capitalism the class who produce all the wealth and receive in return only enough to keep us in working order have to bear the brunt of the downturn in the capitalist economy. We have to suffer for the shortcomings of their system. Whilst socialists might have several disagreements with the miners’ leader Arthur Scargill he [has], at least, had the guts and common sense to lead his members out of the hall when the representative of the class enemy began his speech. This policy of so-called “Social Partnership” must be rigorously opposed by all trade unionists with any understanding of the class nature of present-day world-wide society.

Workers need a political party to build a democratic movement designed to oppose and end a system based on the exploitation of the majority by the minority. Likewise, we need a strong industrial movement to defend ourselves so long as the system of capitalism remains. The socialist message to workers who may despair at the state of working class organisation at the present time echoes that of the IWW activist Joe Hill “Don’t mourn, organize”.