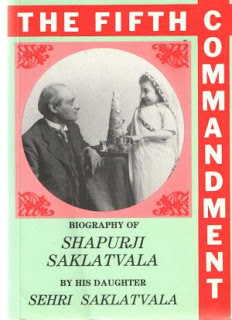 The author was sixteen years old when her father, Shapurji Saklatvala, died in 1936 but more than 50 years later her devotion to his memory is clearly evident in this biography of his life and work.

Saklatvala was a Parsee, born into an affluent Bombay family in 1874. But after emigrating to England in 1905 he gradually gave up his family business connections to devote himself to politics. From 1922-23 and 1924-29 he was a member of parliament for Battersea North. First for Labour and then as a Communist.

During his time as an MP, and afterwards, Saklatvala tirelessly worked to inform the public of the exploitation of Indian workers, and also helped to form a Communist Party in India.

There is no doubt that Saklatvala had the courage of his convictions and was a thorn in the side of the establishment. In May 1926 he served two months in prison for sedition. Such was the haste and determination to silence him that detectives tried to arrest him before the Emergency Powers Act was passed.

Saklatvala’s life epitomises the futility of reformism. He was a sincere man with a genuine wish to see poverty eradicated. Despite having a serious heart condition he kept up a punishing schedule of work which undoubtedly hastened his premature death. But he tackled effects rather than causes: during the 1923 budget debate Saklatvala asked for low incomes to be free from tax. But the take- home pay of workers is subjected to downward pressure irrespective of the amount of taxes levied. A revolutionary would have advocated the abolition of the wages system; anything less is simply a continuation of the exploitation of the working class by the capitalist class.

Chapter 20 gives the full text of Saklatvala’s speech defining socialism in the House of Commons on 21 March 1928. He correctly repudiated nationalisation as a path to socialism and understood the necessity for socialism to be a worldwide movement. But instead of a socialist society he envisaged standardisation of working conditions and wages in all countries to avoid the extreme exploitation of workers in underdeveloped countries, and the nationalisation of all industries under workers’ control. He also stated his belief that Russia was a socialist country.

Despite his criticism of capitalism, Saklatvala did not understand that while the wages system existed capitalism—either monopoly capitalism or state capitalism—would continue nor that a socialist society, with goods produced for use instead of for sale, would have no need of money or any means of exchange.

Saklatvala once stated that he had made up his mind never to admit even the tiniest criticism of Russia because that, for him, “was like a sin against the Holy Ghost”. Today the economic doctrines of state capitalist Russia are discredited, and the late, unlamented British Communist Party has revealed a few unpleasant secrets about its unsavoury past. What a sad epitaph for such a dedicated propagandist! And what a blind alley to devote one’s life to!

This is an affectionate portrait of one of the erstwhile Communist Party’s few MPs and it provides an interesting glimpse of the politics of the 1920s. particularly in regard to British foreign policy in India, with details of the Meerut trial and the Simon Commission.