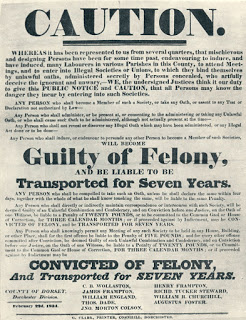 On Sunday 19 July thousands of trade unionists will attend the Tolpuddle Martyrs rally. This annual event is held to remember six Dorset farm labourers who in 1834 were sentenced to 7 years transportation to Australia for the crime of attempting to form a trade union.

The early 1830s were years of considerable trade union activity. In 1834 the Grand National Consolidated Trades Union was formed. The aim of this organisation was to coordinate movements for advances in wages and assistance for strikes especially those against a reduction in wages. This same year saw also much unrest amongst agricultural labourers including forms of direct action such as machine-breaking and rick-burning.

As usual the ruling elite acted with naked class interest. Their concern was not with the causes of the unrest but to find and make an example of the main activists in the hope that this would destroy any idea of union organisation amongst farm labourers. Thus six farm labourers from the Dorset village of Tolpuddle were arrested and charged with the administering of unlawful oaths for seditious purposes which was unlawful under an Act of 1797. That this was a false charge and that the real crime they had committed was trying to form a trade union is shown by the fact there there was no evidence that the accused had any seditious intent.

The reaction of trade unionists against the convictions was swift and has lessons for today. A large procession of trade unionists took place in London and a petition was handed to Lord Melbourne at the Home Office. This was followed by more agitation for the sentences to be quashed and in 1836 the Dorset farm labourers were given a free pardon.

Very rarely has the trade union movement been under greater pressure than it is today. The banning of trade union organisation at GCHQ in 1984 and the anti-union legislation of the 1980s and 90s is proof of this. To really pay tribute to the Tolpuddle Martyrs and others like them we need to rediscover the spirit of early trade unionism with the emphasis on self-organisation rather than waiting for leaders to act on our behalf.
Ray Carr

The Socialist Party will have a literature stand at the rally from 10am to 4pm, at Tolpuddle on the A35 between Bere Regis and Dorchester. If you want to help get the socialist message across to trade union activists just turn up.