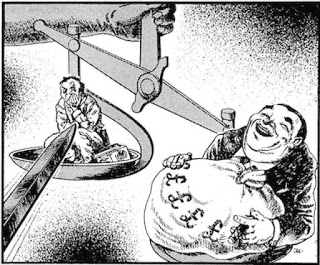 records began in 1857—up by 16 percent in England and Wales, and up by 120 per cent since the Tory government took power—it seems almost customary now that with them should come the time-honoured, trite and pathetic reasons.
Some commentators point to a lack of parental responsibility, low educational attainment standards, and even the influence of television. Roy Hattersley, the Shadow Home Secretary, missing the point as usual, said “the truly appalling figures were the result of ministerial inactivity, insufficient police officers and an inadequate crime prevention programme.” (Guardian, 10 March).
The best John Patten, the Home Office Minister of State, could do this time round was to suggest that we take too few precautions and that “we must not forget who is to blame. The only people to blame are the criminals”. (Guardian, 10 March).
But after 13 years of Thatcherism/Majorism, did anyone really think we would witness a reduction in crime? Crime is an inevitable aspect of capitalist society and its component parts, inequality, exploitation and rampant individualism, which were highly recommended by Mrs Thatcher herself.
We live through times in which the rich have become richer and the poor poorer; in which there are more homeless people than at any time in living memory; when falling profit rates have been responsible for factory closures, bankruptcies, redundancies and unemployment, and when thousands of homes have been repossessed.
If anything, crime statistics reveal a growing protest against alienation and powerlessness. David Owen, Chief Constable of North Wales, was right when he commented that “we live in a materialistic and acquisitive society” (Guardian, 20 December 1990).
Under the ground rules of capitalism, only those with enough money have access to the benefits of civilization. Take an underpaid youngster, working for a pittance, who lives on a run-down inner-city housing estate with few social amenities, and with even fewer prospects. Everywhere they go they are reminded of their position—in the shops they walk past with the goods they can’t afford, in the souped-up cars that whizz past them, and even in the television adverts they view, portraying sunshine families going into orgasm over a bowl of cereal. They live in a cut-throat, dog-eat-dog society that they can’t comprehend. As Engels observed in his The Condition of the Working Class in England in 1844:

It was not clear to his mind why he, who had done more for society than the rich idler, should be the one to suffer under these conditions. Want conquered his inherited respect for the sacredness of property, and he stole . . . Theft was the most primitive form of protest. (Panther edition. 1969, p. 240).

For so many, the pangs of alienation and powerlessness, coupled with that sense of betrayal and dashed hopes born of the broken promises of the governing capitalist class, have never been so bitter. Engels’s words still ring out a century and a half after they were penned:

There is . . . no cause for surprise if the workers, treated as brutes, actually become such; or if they can maintain their consciousness of manhood only by cherishing the most glowing hatred, the most unbroken inward rebellion against the bourgeoisie in power. They are men so long only as they burn with wrath against the reigning class. They become brutes the minute they bend in patience under the yoke, and merely strive to make life endurable while abandoning the effort to break the yoke, (pp. 144-5).

Crimes against property make up 94 percent of all crimes. In socialism property crime would be non-existent. With common ownership and democratic control of the means of production and distribution, and an end to the money system, there would be no incentive to steal what could be given for the sake of asking. For instance, at present millions of machines lie idle in factories. In socialism these could be operated by those willing to do so—the present-day unemployed and those who do unnecessary work—producing goods not for profit but because people wanted them. Bulletins informing people of the availability and quality of goods and their outlets would replace advertising. Burglaries and car theft would be crimes confined to the history books. Robberies in a moneyless society would be unimaginable.
Crimes against the person, currently up by three percent, would significantly diminish. Many are committed under the influence of alcohol, and as inebriation is often an escape from the harsh realities of everyday life there would be less incentive for people to numb the pain of their existence.
Crime, however, is not only inevitable under capitalism it is also necessary. By highlighting crime statistics, crime that is said to be committed by working class people (let’s forget fraud and tax evasion by big business), attention is diverted from the real culprit and on to workers caught up in the mess created by their “betters”.Thus, the ruling elite find the pretext to enforce more law and order which in the long run helps maintain their ideology and power.
John Bissett
Hebburn, Tyne & Wear
What choice?
Dear Editors,
As society’s technological knowledge advances it would seem only logical that the long-lasting lightbulb and the re-usable match would be available everywhere but I haven’t seen many of them either (Scorpion’s comment on my letter to the Guardian in your March issue). This would seem rather at odds with an ideology which places such a high priority on “freedom of choice”. However when such an ideology has deployed and is prepared to use a weapon which gives me and millions of others who have no wish to be consumed by a nuclear war no choice whatsoever, it is in fact being entirely consistent.
David Bishop
Nottingham