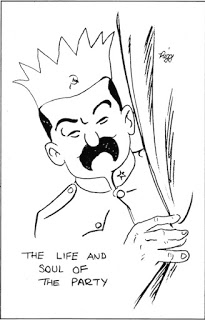 The late and unlamented British Communist Party— now renamed since its last Congress in November the “Democratic Left”—has recently opened its archives and revealed the extent of its subservience to Russia. George Matthews, a former Assistant General Secretary, wrote in the now defunct party’s now defunct journal Changes (14- 27 September 1991) that in June 1950 Pollitt was summoned by Stalin to draft a new programme for the British Party.

On 15 June 1950 Pollitt’s report of his discussions with Stalin was put before the Party’s National Executive Committee who were reluctant to accept all of Stalin’s proposals because they were too controversial. During the next three months three drafts of a programme were prepared and on 20 October Pollitt took a few days’ holiday which in fact was a trip to Russia for further consultation with Stalin. A fourth draft was produced in December, and in January 1951 Pollitt paid another secret visit to Russia. After further consultations with Stalin The British Road to Socialism was published shortly after his return to London.

Secrecy was considered essential in the cold-war conditions of the early 1950s because of the risk of being linked too closely with Russian foreign policy or accused of being financed and manipulated by Stalin. George Matthews has shown moral courage in admitting his part in the secret negotiations between Pollitt and Stalin which occurred forty years ago:

The concealment of the role of Stalin by the party leadership, of which I was part, for so many years was indefensible.

Matthews takes the view that the Communist Party should have insisted that Stalin’s advice was acceptable only if it was public advice.

It was inconceivable that in the conditions of 1950 the British party would have taken such a stand, and fruitless to speculate on what Stalin would have done if it had.

He who pays the piper calls the tune and the British Communist Party was too financially dependent on Russian money to resist Stalins demands. According to another former Assistant General Secretary, Rueben Falber, writing in the last issue of Changes (16/29 November 1991), the British Party continued to receive cash from Moscow right up until his retirement in 1979.

In stating “I can only speak for myself in saying that I am not proud of the part I played in this affair”. Matthews has publicly confessed his regret for being a party to the secret negotiations between Pollitt and Stalin and to relegating the Communist Party to a mere tool of Russian policy. But there seems to be little regret at the undemocratic and secret decisions made by the Communist Party on other occasions.

In 1947 a major policy change occurred with Pollitt’s pamphlet Looking Ahead in which he stated that it “is possible to see how the people will move towards Socialism without further revolution, without the dictatorship of the proletariat”. This change in Communist Party rules was made without debate of any kind. It is really beside the point whether this was all Pollitt’s own work of if, like The British Road to Socialism, it was dictated by Stalin. It revealed the sort of society the Communist Party wanted to see established in Britain: one where leaders would decide in secret the way it should be run.

After Khrushchev’s revelations about Stalin in 1956 Pollitt stated that “in condemning errors and abuses we must not forget that they occurred within the framework of socialist advance”. But the rank and file were not to be given details of the “errors and abuses” because they were only discussed at a secret session of the British Communist Party in April 1956.

The history of the Communist Party was one that was dominated by secrecy; twists and turns of policy; decisions made by individuals or unrepresentative cliques; manipulation and financial control by Stalin; and a complete lack of understanding of socialist principles.

The rump of the old Communist Party may regret their past secrecy and subservience to Russia but they have yet to apologise for misleading workers or perverting socialist principles. And their recent pronouncements show that they still lack socialist understanding.