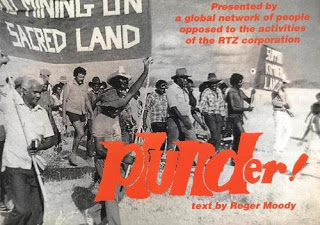 We don’t grow healthy crops anymore, our traditional customs and values have been disrupted and we have become mere spectators as our earth is being dug-up. taken away and sold for millions. Our land was taken away from us by force: we were blind then but we have finally grown to understand what’s going on”.

These words were spoken by Perpetua Serero in Bouganville, Papua New Guinea, after she and her community were driven off the land which they were dependent on for their livelihoods so as to make way for a potentially highly profitable but environmentally and socially disastrous mine operated by one of the world’s largest multinational mining corporations. Rio Tinto Zinc. Her words are echoed all round the world by thousands of people whose lifestyles and communities have been wrecked by the operations of this company.

In its relentless pursuit of profits Rio Tinto Zinc has left a trail of human and environmental devastation of staggering proportions, as detailed in Plunder published by Partizans (218 Liverpool Rd, London N1 1LE, price £6.50 including postage). This is a thoroughly researched account of how RTZ arrived at and continues to maintain its position of world leader in the mining industry. The book deals with the company’s mining operations in every part of the world and in each section are well-documented examples of the devious, competitive practices that are typical of such capitalist organisations. These include a number of dirty tricks such as brow-beating opponents, leaning on governments, price-fixing, breaking the law, and union- busting.

RTZ claims in its glossy annual report to be “bringing out the best in the world”. It even goes so far as to state that it aims to “act responsibly as a steward of the essential resources in its care” and “to involve the local communities wherever it operates and to promote their well-being”.

Plunder tells a very different story. In its mining operations in over forty different countries. RTZ and its subsidiaries have poisoned the air, the rivers and the land, made species of animals and plants extinct, and turned areas of wild scenic beauty into barren wastelands. Far from promoting the well-being of local communities, RTZ has uprooted and displaced indigenous peoples, destroying their livelihoods and communities. It has turned them into an alienated and unskilled population forced into a lifestyle of abject poverty, prostitution, alcohol abuse and crime. In other words, they are forced into a life of wage-slavery at its bottom-most level.

RTZ has disregarded health and safety standards, causing the deaths over the years of hundreds and possibly thousands of workers from dust and radiation related diseases. Many of its workers, as in the case of the Rossing uranium mine in Namibia are expected to live in accommodation described as the worst in the world. RTZ also has a long record of trying to prevent workers organising trade unions. For instance, in 1937 the company Chairman was able to report to the shareholders in London on the tense labour situation at the company’s mines in Spain: “Since the mining region was occupied by General Franco’s forces there have been no further labour problems .

. . Miners found guilty of troublemaking are court-martialled and shot”.

However, Plunder is more than just an account of the nefarious activities of a mining company. It is also a resource book by and about people fighting for their lives, their communities and their environment against the profit-seeking onslaught of just one of the many multinational giants who constitute the very machinery of the capitalist system. The book represents the cooperative efforts of many individuals, organisations and communities around the world brought together by Partizans (People Against RioTinto Zinc and its Subsidiaries) who published the book at their own expense. The text written by Roger Moody is based on research and contributions by people from indigenous communities. trade unions, organisations concerned with the environment and occupational health, and many others. It has been published with the intention of being a handbook for people confronting multinational mining companies, particularly more isolated communities with little experience of the dirty business of capitalism and perhaps unaware that others are in the same situation as them.

For Socialists Plunder is a valuable book in the battle of ideas. Firstly, because it represents a wealth of evidence to show that the profit system cannot be run in the interests of working people and their environment. Secondly and more importantly, because it has grown out of a vision that global solidarity is the only way to bring about an end to this exploitative global system.

In Plunder we hear the voices of people who are aware that RTZ has only one driving force behind it, the profit motive. The indigenous communities involved in the battle against RTZ bring to the class struggle a sense of communal responsibility to each other and the world around them as well as a sense of individual self-respect. To some of these communities property and hierarchical social organisations are alien concepts. Their experience of alternative lifestyles based on mutual respect and responsibility for the land on which they depend for their living imbues their resistance with a inner strength the importance of which we should not ignore or deny.

The struggles of these communities serve as a reminder that socialism is about knowing that an alternative to capitalist society is possible and that we can bring it about by understanding the source of our oppression and acting in a spirit of comradeship and solidarity with our fellow workers throughout the world.