In early, primitive societies, people believed that their lives were ruled by spirits or gods.

Given the extent of their knowledge, they reasoned that things that were vital to life, such as the sun and rain, were in the giving of their gods, and they assumed that if you kept on good terms with these gods, things would go well; and if they did not, you had failed in some way—incurred some god’s displeasure.

Today, from the heights of accumulated learning we look down upon these poor savages and say, well, they did not know any better.

But in some ways they were wiser than us, because they reasoned logically (false premise accepted) and acted according to the conclusion of that logic.

Believe it or not—we don’t.

We let our lives be ruled by a god of whose existence we are unaware, and whose displeasure is unwittingly taken to be the necessary price of progress.

Let us not talk of primitive people.

We let this god rule our lives, accept all the evils it can throw at us—and do nothing.

There is a touch of irony in the way we really believe we control our destiny, because, for example, we have made the computer. Yet at the same time it is not uncommon to come across people who think computers are taking over that control.

Let us not talk of primitive people.

As socialists, we know what this is. We know that computers, or any other machine or tool, have no volition of their own. Pushed to the point, neither does anyone else; it is just part of twentieth century mythology. But so befuddled have people become by the overwhelming dominion of finance, the market, capital, however you see it, that they cannot comprehend their own power, except in terms of the very thing that is their own master. There is hardly any aspect of life which is not free from the touch of Midas; so that the more universal the system becomes, the more difficult it is to comprehend, the more it becomes inseparable from, and part of everything. This is why, to most people, capitalism does not exist.

To primitive people, the sun and the sun god were two things. To the sophisticated of today, the machine and the machine god are one. If we are to substantiate our claim to be intelligent, sophisticated and scientific, then we have to break the circle; to start to use our capacity for rational analytical thought to some purpose. No-one suggests this is easy—it involves starting to think differently. Yet, not so differently. One of the great powers of the human mind is the power of abstraction. This is how primitive people created their gods; from the sun, the sun god; from the rain, the rain god.

From the productive process, let us abstract the act of production, and its 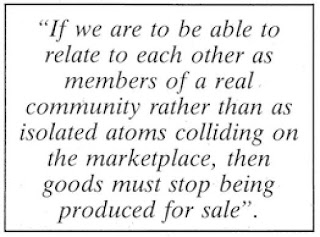 god—its financial incubus. For this is the problem.

Consider: what would it be like if the only issue in making something was its making? There is the workshop, the machines, the tools, the materials, the transport; and somewhere the people who are waiting for your product.

What else do you need?

What else have we got?

We have our greatest problem— capitalism and the property system.

The fact is that our work is dominated by the demands of the financial noose around its proverbial neck.The fact is that all work and all production is hobbled by the financial network of the market—the god we created as a distorted reflection of our own productive powers and without whom we believe production cannot take place. How and why this is so is a matter of the past. Why and how we do away with it is a question for the future, which we need to address today.